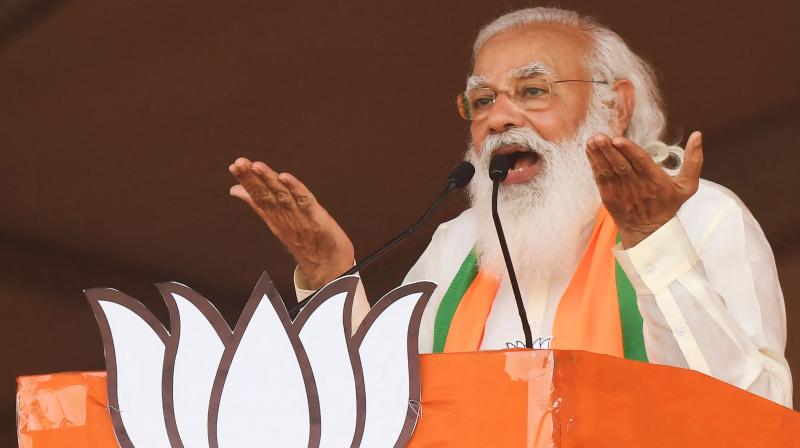 PM Narendra Modi addresses supporters of the Bharatiya Janata Party (BJP) during a mass rally ahead of the state legislative assembly elections at the Brigade Parade ground in Kolkata. (Photo: AFP)

Kolkata: Mocking West Bengal chief minister Mamata Banerjee’s recent “scooty ride” from her Kalighat residence in south Kolkata to Nabanna, the state secretariat in Howrah, Prime Minister Narendra Modi on Sunday asserted that the Trinamul Congress supremo’s two-wheeler is destined to fall along with her as she is defeated in Nandigram, the hot seat of the West Bengal Assembly election where she has chosen to contest from after fleeing her winning seat of two terms, Bhowanipore, fearing a loss on her home turf.

Emboldened by Mithun’s induction into the saffron party at the mega poll campaign event, Mr Modi taunted Ms Banerjee, saying: “It is good that you are fine. But your scooty is headed towards Nandigram instead of moving to Bhowanipore. We are well-wishers of all always. We do not want anyone to be injured. But what can we do if her scooty itself has decided to fall in Nandigram?!” His jibe directed at Ms Banerjee with full confidence assumes significance as the BJP has fielded her former Cabinet colleague and ex-TMC heavyweight Suvendu Adhikari against her at Nandigram at his wish since it is his home turf. Impressed by the huge turnout at the rally, Mr Modi quipped: “It looks like of May 2 (the date of the poll results).”

Tearing into the dynasty politics in the TMC supremo’s family to target her MP nephew Abhishek Banerjee, the PM wondered: “The people of Bengal elected to see you in the role of Didi (elder sister) in the last 10 years. But why did you, as Bua (aunt), keep yourself restricted to only one Bhatija (nephew)? Why did you select yourself to be Bua for the love of only one Bhatija? Why did you get busy in fulfilling the aspirations of your own Bhatija instead of the expectations of lakhs of Bhatijas and Bhatijis? You also could not shun the Bhai-Bhatijabad culture of the Congress, against whom you had once revolted. Remember, you are the Didi not only of Bengal but also of the entire country.”

Calling the TMC’s huge graft as the “Olympics of Corruption” in a speech over an hour, Mr Modi also played the industry card, the BJP’s second prime weapon after Hindutva, saying that it would usher in investment and infrastructure expansion which would bring “Asol Poriborton” (real change), replacing the dangerous politics of appeasement and syndicate and extortion nexus of the TMC with trade and business, employment generation and development in all other sectors across the state.

To allay the fears among Bengalis about the saffron party's religious fanaticism, which the TMC has been warning about, the PM further pledged that the local culture and sentiments, including the lifestyle and food habits of Bengalis such as Machh-Bhaat (fish and rice) would be “protected” and that the next government would work for five years, giving priority to popular choices and wishes, to build the foundation of a roadmap for the next 25 years in West Bengal.