'We aim to uplift the weakest,' Modi at BJP manifesto launch 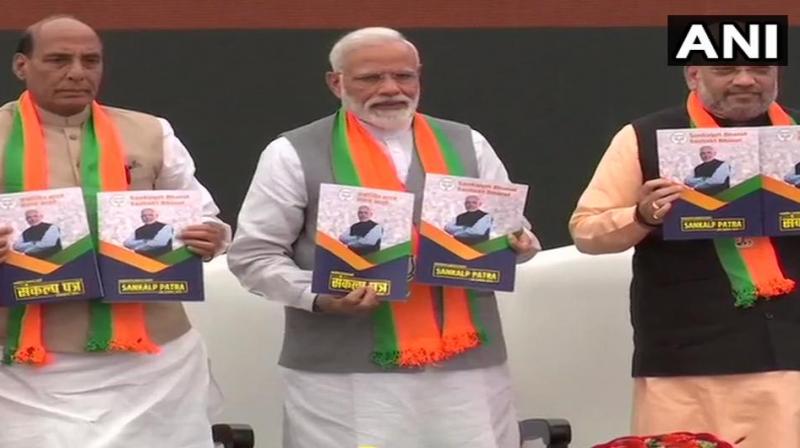 New Delhi: The Bharatiya Janata Party’s poll manifesto released Monday detailed the government’s achievements these last five years, sharpened its focus on security and welfare without falling back on party core issues such as the Ram Mandir and the Uniform Civil Code.

“We will explore all options to build the Ram Mandir as soon as possible in a harmonious manner,” Union Home Minister Rajnath Singh said after the manifesto was launched in the presence of Prime Minister Narendra Modi, BJP chief Amit Shah and other top party leaders.

The manifesto is also committed to annulling Article 35A of the Constitution, as the “provision is discriminatory against non-permanent residents of Jammu and Kashmir”.

The manifesto or sankalp patra (document of promises) was based on the theme of a ‘Sankalpit Bharat, Shashakt Bharat’ (Determined India, Empowered India).

“Nationalism is our inspiration, we aim to reach the last man in the queue, and give the country good governance,” Prime Minister Narendra Modi said.

Modi, while emphasising the salient points of the manifesto, said it was his duty to take India on “one mission, one direction”.

“We should think how by 2047, India could become a developed country. We will work hard in the next five years, from 2019 to 2024, to build a solid foundation for that dream,” Modi said.

Speaking first, Amit Shah lauded the five-year rule of Narendra Modi, stating that he had provided India a decisive government. “India's development from 2014 to 2019 will be written in golden words in history,” Shah said, adding, “He has dared to carry out air and surgical strikes on the very foundation of terror”.

He spoke of the development work done in the last five years. He said the party has made 75 pledges in the manifesto, promising “to fulfill all expectations of the people” by the time India turns 75.

Shah harped more on the government’s efforts to deal with terrorism, saying, “Prime Minister Narendra Modi has sent out a strong message that India cannot be taken lightly.”

After the manifesto release, Union Home Minister Rajnath Singh said the document touched upon every section and region. “It is a visionary and practical document,” he said.

Explaining the BJP’s manifesto, Singh said, “With promises made in this manifesto, we are taking a step towards building a 'New India.' We had a zero tolerance policy towards terrorism, it will continue till terror is eliminated completely.” Singh also said strike capabilities of armed forces would be strengthened with modern equipment.

Union Finance Minister Arun Jaitley said the manifesto was prepared with a strong national vision, not with a ‘tukde tukde’ or Ivy League mindset. “This manifesto is rooted in Indian reality,” he said, adding, “Our new policy, new doctrine of striking terror at its very origin has received global recognition.”

External Affairs Minister Sushma Swaraj said: “We are working for a stable and strong government, whereas the Opposition is working to form a weak collation government.”

The Congress manifesto had put major thrust on welfare measures, including a promise of giving Rs 72,000 to the poorest 20 per cent households in India.

Senior BJP leader Arun Jaitley had on Sunday unveiled campaign themes and other materials of the party's election campaign, with 'Phir ek baar, Modi sarkar (Modi government, once more)' as the tag line.