India   Politics  08 May 2017  After SC jolt in fodder scam, BJP says end of road for Lalu in politics
India, Politics

After SC jolt in fodder scam, BJP says end of road for Lalu in politics

The apex court on Monday revived criminal conspiracy charges against the former Bihar chief minister and others in the fodder scam case. 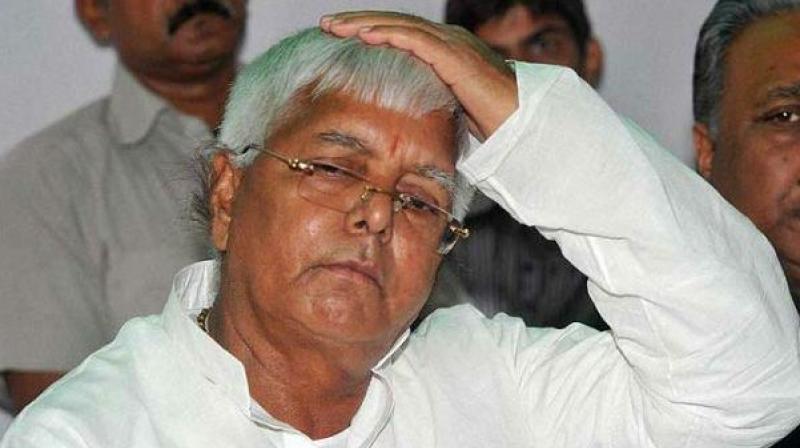 The two-judge bench also ruled that the trail has to be completed within nine months. (Photo: PTI)

Patna: Hailing the Supreme Court order that Lalu Prasad will face trial in all four fodder scam cases, senior BJP leader Sushil Kumar Modi today said the verdict means the 'end of the road' for the RJD chief in politics.

"It's the end of the road in politics for Lalu Prasad as he is sure to be convicted in three other cases of fodder scam and would be debarred from electoral politics for many more years," he told reporters.

Politically, the ruling has given advantage to Chief Minister Nitish Kumar, he said. "As a weak Lalu forced to kneel down by the court order will not be able to trouble the (ruling) Grand Alliance much."

Sushil Modi was one of the early petitioners in the scam.

The Supreme Court today ruled that the RJD leader will stand separate trial in all four fodder scam cases and set aside the Jharkhand High Court order which had dropped
conspiracy charges against him.

The SC also directed the trial court to complete the proceedings against the 68-year-old RJD chief and others within nine months.

"Now, for nine months, Lalu Prasad would have no other work but to run to courts in four cases related to the fodder scam," Sushil Modi, who is also the Leader of Opposition in the state's Legislative Council, said.

Asked if the BJP would extend its hand to Kumar and work for an NDA rule, the former deputy chief minister replied in the negative.

"Why will the BJP invite Nitish Kumar? The BJP is so strong in Bihar today that if an election takes place in the state today it would fetch more than two-thirds of seats on
its own," he said.

Sushil Modi, who has over the past one month levelled serious allegations against Lalu Prasad and his family members for 'acquiring benami properties' in the state and outside, said the judgement would weaken the family's sway in the state politics and trigger 'a war of supremacy' among its members.

"Lalu's family will meet the fate similar to that of Samajwadi Party of Mulayam Singh Yadav where family members now have daggers drawn against each other," he said.