The polling in Ladakh Lok Sabha constituency was held in the fifth phase of the general elections on May 5, three days after the incident. 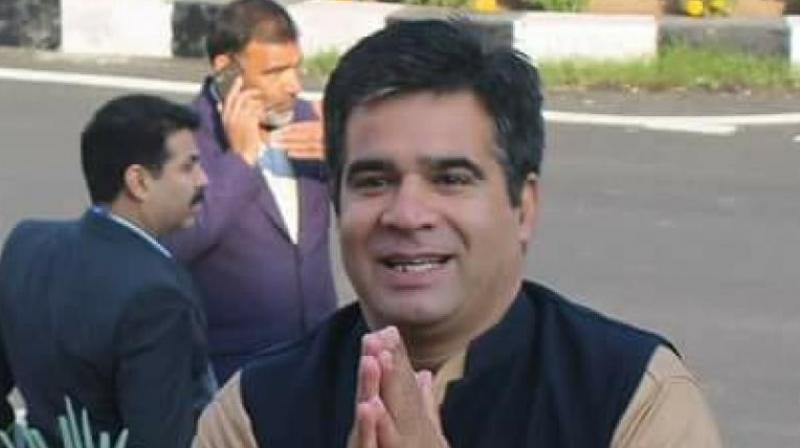 Srinagar: The BJP’s allegedly trying to bribe Leh-based reporters for favourable coverage is snowballing into a major political controversy in Jammu and Kashmir and beyond.

Congress and various other opposition parties and journalists’ bodies have demanded an impartial probe into the May 2 incident and stern action against those found guilty.

However, on Wednesday, the BJP claimed that the CCTV footage of the incident does not show journalists being bribed by its leaders. “The CCTV grab being circulated on the social media is of the invitation envelopes being given to reporters for the coverage of Defence Minister Nirmala Sitharaman’s visit to Leh on May 4. This is being shown as if money is being given to them,” Vikram Randhawa said at a press conference in winter capital Jammu.

He also said that some of the invitees opened the envelopes and returned them saying they did not need special invitation as they were already covering the event.

He accused the Congress and anti-party elements in Kashmir for spreading “canard”. He said, “All allegations of Leh journalists are baseless and misleading. After the event some Congress-minded journalists deliberately created hype over it alleging that money is being given to them. They’re being supported by it (Congress) and anti-BJP elements in Kashmir to malign the image of our party."

He claimed that after the presser, “these same journalists were with us for about one hour and relished lavish lunch for which we paid Rs 11,000 bill. Normally when 8-10 people dine together, the bill could be Rs 1000-2000 but their lunch cost us Rs 11,000, isn’t it also a type of bribe? He said that the party will file defamation case against Leh journalists.

According to a complaint lodged with the police by the Press Club of Leh, the BJP leaders including its Jammu and Kashmir state president Ravinder Raina and former MLC Vikram Randhawa, “tried to bribe media persons” on May 2 after a press conference held in Ladakh’s main town “to use their platform to influence the outcome of the election”. The polling in Ladakh Lok Sabha constituency was held in the fifth phase of the general elections on May 5, three days after the incident.

The BJP has denied the charge and threatened to sue the journalists for defamation. However, the official sources in Leh said that the allegation has been found prima facie correct during inquiry conducted by Leh’s Deputy Commissioner and election officer Avny Lavasa. She incidentally is the daughter of Election Commissioner Ashok Lavasa.

She said that steps have been initiated for filing a First Information Report or FIR in the case after a probe was conducted. She said that although the complaint alleged violation of the Model Code of Conduct (MCC) by the BJP leaders, it amounted to a criminal offence. She added that it is a non-cognizable offence.

The Leh police put up the case before the district court on Tuesday and is now waiting for its directions to file an FIR in the matter.

The local journalists have alleged that after Raina addressed a press conference in Leh on May 2 ahead of Defence Minister Nirmala Sitharaman's rally in the town his party colleague and former lawmaker Randhawa started distributing envelopes to them.

Tsewang Rigzin, one of the reporters who covered the presser, said that they were shocked to see Rs 500 notes in these envelopes. Feeling insulted, they returned the envelopes outright. “We showed our anguish then and there at the BJP’s audacity to bribe us,” said Rigzin.

Two days later, seven journalists including Morup Stanzin and Rinchen Angmo, presidents of Press Club of Leh and Ladakh Journalists Union, respectively, approached police station Leh and filed a complaint, requesting it to register an FIR against the accused for allegedly violating the MCC and for trying to bride media persons.

A statement issued by the Press Club of Leh said that the BJP leaders’ act was a “clear violation of MCC and an attempt to belittle the dignity of media men in Leh”. It said that the members of the Leh-based media fraternity have fought corruption and that it was now up to the authorities to take appropriate action in the matter. “We’ve done our duty. The ball is now in the authorities’ court,” said Angmo.

The BJP was quick to deny the charge. It claimed that the envelopes contained the invitations to media persons to cover the party rally which was to be addressed Defence Minister and Arunachal Pradesh Chief Minister Pema Khandu.

Raina issued a statement on May 5 alleging that the Press Club of Leh was spreading “false propaganda” against him and his party and it was “politically motivated”. He sought a “written apology within 48 hours” or else threatened to file “a defamation case” against it.

However, a video has now emerged showing Randhawa handing out envelopes to journalists in presence of his party’s State unit head. The video is actually CCTV footage from Hotel Sangaylay in Leh, the venue for the BJP leaders’ press conference. It shows a woman leaving an envelope on the table. She has now said that when she asked Randhawa about the Rs. 500 notes being in the envelope he told her that it was a token of love. She and other journalists have also said that when they objected to it, the BJP leader told them that they do this in Jammu too, so what was the problem.

Reacting to the incident, former chief minister and National Conference leader Omar Abdullah tweeted “We expect @JmuKmrPolice & @SpokespersonECI @ECISVEEP to take cognisance of this complaint filed by the Press Club in Leh”. Later he wrote on micro-blogging site “In light of the CCTV footage purported to show BJP leaders attempting to bribe journalists in Leh I'm retweeting my original tweet with the letter of complaint by the Press Club Leh. Action must follow".

PDP president and former chief minister Mehbooba Mufti also tweeted on the incident. She said, “If a Congress / TMC / BSP / SP leader was caught trying to pay off media with such solid evidence, media would’ve gone hammer & tongs about it. Why the radio silence & no hashtags? Glad to know that some have the guts to refuse. Proud of Avny Lavasa who put them in their place”.

The Indian Journalists Union (IJU) has while saluting the Leh-based journalists for upholding the best tradition of journalism and integrity, urged the District Electoral Officer to take strict action as per the law against the two leaders, who following an inquiry have been found “guilty” and the police have been asked to register a FIR against them.

The IJU president and Press Council member Amar Devulapalli and secretary general and IFJ vice-president, Sabina Inderjit expressed solidarity with its affiliate Ladakh Journalists Union, the Press Club Leh for their exemplary action and pursuing the matter since 2 May.

The IJU said that the BJP leaders have had to eat their own words as the inquiry has revealed that they tried to bribe the journalists, which is a clear violation of the MCC. The IJU also said that it is committed to extend all support to the scribes in Leh to take this case to its logical conclusion and ensure that “such brazen attempts to influence the media by the BJP are exposed”.

The PDP in a statement on Wednesday said the Leh incident “reflects BJP’s mindset towards the vital and important institutions of democracy and how the party is out to defame and destroy one of the honest and sincere professions of the world”.