Chowkidar will take 'shahenshah' to jail in 5 yeras: PM on Robert Vadra

The Prime Minister went on to criticise the Congress over the 1984 anti-Sikh riots. 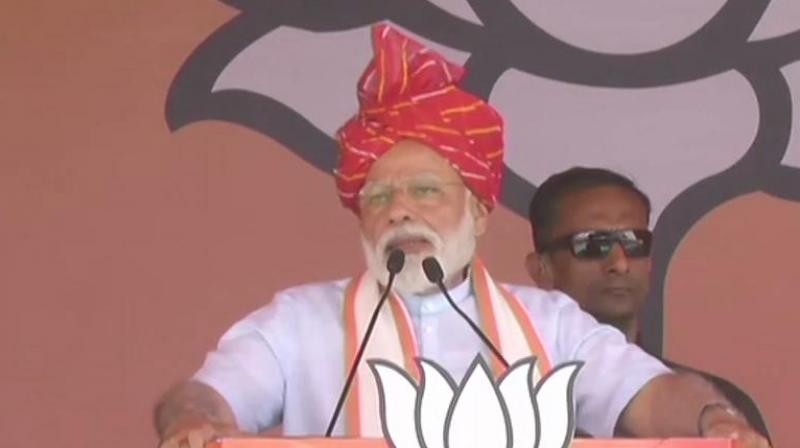 Modi, while addressing the gathering here, also said those who have looted the country 'will have to pay back.' (Photo: ANI twitter)

Fatehabad: Prime Minister Narendra Modi on Wednesday said if the NDA government comes back to power, he will put the 'shahenshah' who looted farmers behind bars within the next five years.

"Whenever there was Congress' government in Centre and Haryana, they took away the land of farmers at low rates. With your blessings, this Chowkidar has taken those who looted farmers to the court. They are going around seeking bail. They are going to ED offices. They used to think that they are 'shahenshahs' (emperor) and nobody can touch them. Now they are nervous. I have already taken them to the door of the jail, give me your blessings and I'll put them in jail within next five years," Modi said in an apparent reference to UPA chairperson Sonia Gandhi's son-in-law Robert Vadra, who is currently facing trial in a land deal case.

Modi, while addressing the gathering here, also said those who have looted the country "will have to pay back."

The Prime Minister went on to criticise the Congress over the 1984 anti-Sikh riots.

"In 1984, in different parts of the country including Delhi, Punjab and Haryana thousands of our Sikh brothers and sisters were killed at the behest of the Congress family," he said. "For 34 years, a dozen of commissions were made, but justice was not given to the Sikh community. Your 'Chowkidar' had promised to punish those involved in the 1984 riots. I am happy that the process to punish them has begun."

Modi went on to say, "This shameless Congress is still providing benefits to these tainted people who were involved in committing that sin. They even made one of those involved in the riots as the Chief Minister of Madhya Pradesh. From this, it is clear that Congress is not bothered about your feelings."

He also accused the Congress of not making enough efforts at the time of Independence to ensure that Kartarpur Sahib is a part of India.

"Congress' history is about ignoring your emotions. Otherwise, there was no reason why Kartarpur Sahib is in Pakistan. At the time of partition, if they would have made a little effort then Kartarpur Sahib would have been in India... But our government is making efforts to ensure that people who go to seek blessing from Kartarpur Sahib don't face any problem. For this, the Kartarpur Sahib corridor is being made," he added.

"Congress is also promising about removing the sedition law. Congress wants that the 'tukde tukde' gang, those who insult India, those who insult the national flag and those favouring naxals should be given full freedom. I want to know whether you accept these promises made by the Congress," he said addressing an election rally here.

'Tukde tukde gang" (the gang of splitters) is a slogan ascribed to protesters in Jawaharlal Nehru University three years ago, an incident in which students union leader Kanhaiya Kumar was slapped a case of sedition against him. He is contesting the Lok Sabha elections from Begusarai in Bihar as a CPI constituency.

Modi also slammed Congress saying that in its manifesto the party has said that that if they would form the government in the Centre, they will take away the security provided to Jawans posted in sensitive areas including Jammu and Kashmir through AFSPA.

"This means that Congress is openly talking about giving full freedom to the stone-pelters and those who support terrorism," he said in the rally in Sirsa constituency, an area that sends a considerable number of people to the army and security forces.

He further asked Opposition leaders why they do not talk about Defence policies in their public meetings.

"Can any nation become a world power without strengthening its defence? Will the world listen to a country which cannot protect itself? Have Congress or any other 'mahamilavati' parties ever spoken about defence policies in their gatherings? They can't say anything on defence because of their history in this field," he said.

"Before 2014, terrorist attacks used to take place but the weak government of the Congress used to only give statements. The strong government that people have made in the Centre has given strength to our Jawans. Now our Jawans enter Pakistan and kill terrorists. Those terrorists, who used to threaten us earlier, are now hiding away," he added.