He finally appealed for votes from the people for BJP in large numbers. 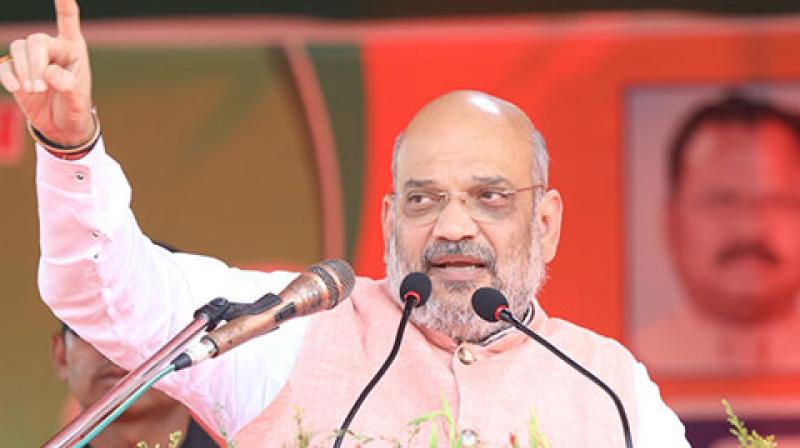 On Jammu and Kashmir, Shah made BJP's stand clear that they would surely remove article 370 from the state. (Photo: ANI twitter)

Jamshedpur: BJP President Amit Shah asserted on Wednesday that the only relevant issue in this election is national security and there is only one man who hasdelivered results on this count and that is Prime Minister Narendra Modi.

"Don't give vote for development works to BJP candidate Bidyut Baran Mahto in Jamshedpur; vote for him because Narendra Modi made the country's border secure. The Prime Minister has taken effective steps to secure the borders of the country. In the regime of UPA-I and II, enemy forces used to run havoc in the country but no action was taken on that front," he said addressing an election rally.

"In the recent past, our 40 security personnel lost their lives in the attack by Pakistan-aided terrorism in Pulwama. Due to the decisive nature of PM Modi, our brave Indian Air Force (IAF) troops retaliated and entered enemy territory to debase their terror camps. India is only the third country after Israel and United States of America (USA) to have retaliated to terrorism in this brave manner," Shah asserted.

He attacked the opposition saying, "After our surgical strike, everywhere there was a celebratory atmosphere but there was widespread hopelessness in Pakistan and in the Congress camp."

"I have been to 296 Lok Sabha constituencies around the country and everywhere in the country there is only one wave - 'Modi, Modi'. The people of India were looking for a person for 70 years who will not work for his own family but for every person in the country. That man is Narendra Modi," he contended.

"Along with the central government, the Raghuvar Das government in Jharkhand has also done good work. The state government took the agricultural growth rate from -4.5% to 14% in the state in the last 5 years. More than 35 lakh employment opportunities were created and around one lakh government jobs were created for the people of Jharkhand. 13 Polytechnics and 6 medical colleges were opened. Earlier, there were 300 medical seats; now the figure stands at 900. Naxalism has more or less been wiped off from Jharkhand," he stated.

He finally appealed for votes from the people for BJP in large numbers.

Jharkhand has polls in four phases out of which two phases are over and two remain on May 12 and 19. The counting of votes shall take place on May 23.