Chidambaram said the economy has gone to "rack and ruin" and the governement's report exposes its "false propaganda". 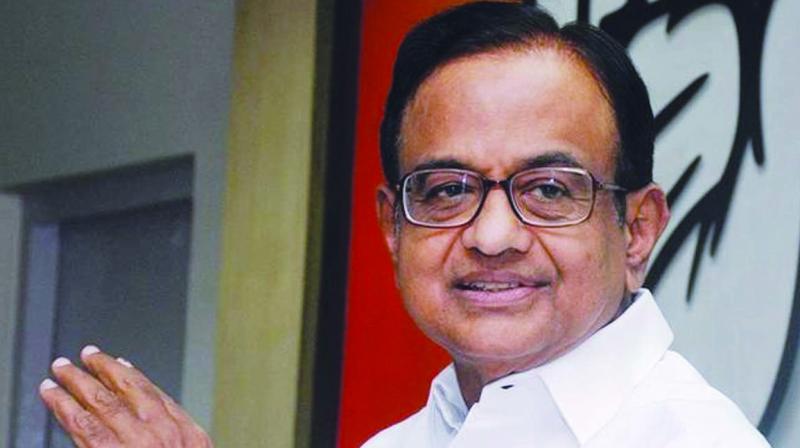 He also accused Jaitley of perfecting the art of "concealing" data and projecting "doctored" information.

"The Finance Ministry's report is a damning indictment of the state of the economy in the country. This is perhaps the weakest point in the economy," he told reporters here, adding the next government has a lot of work to repair the economy to which the BJP has done "great damage".

"With each passing day, as Modi indulges in vile rhetoric, the Finance Minister blogs poor attempts at rationalising that language.

The former Finance minister said the economy has gone to "rack and ruin" and the Finance Ministry's report for March 2019 lays bare the "false propaganda" of the BJP government.

"The NSSO revelations have blown a huge hole in the growth figures put out by the CSO. It turns out that the government has been using bogus data.

"The CSO's growth figures are a sham. The CSO's complicity in putting out false data is a scam that needs to be investigated first," he said, alleging that the political leadership has "interfered" and "intimidated" the Central Statistics Office (CSO) and the National Sample Survey Office (NSSO).

"However much Modi may try to take the narrative away from the economy, ultimately the people will vote on issues that affect their daily lives -- jobs, infrastructure, investment, farmers' distress and debt, ruin of MSMEs, stagnant incomes," he noted.

The Congress leader said the Indian economy has entered a "disastrous" phase of economic slowdown under the Modi-Jaitley "jugalbandi" reflected by the consistent fall in quarterly growth of real GDP.

He claimed that a shortfall of Rs 1.6 lakh crore in the tax revenues would effectively increase the actual fiscal deficit to 3.9 per cent and "the economy is expected to slow down further".

He said once in power, the Congress will adopt a sectoral approach to revive various sectors of economy and find a solution to each of them, besides consolidating banks.

"The Finance Minister has perfected the art of concealing data and projecting doctored information. Contrary to the false narratives of the Modi Government, the poorest Indians have been worst sufferers of the economic mismanagement," he said.

The former minister said the Oxfam's Global Inequality Report 2018 showed that 73 per cent of the wealth generated in India in 2017-2018 was pocketed by the richest 1 per cent of the Indian populace, while the poorest 50 per cent saw a marginal increase of 1 per cent in their wealth over the same period.

Chidambaram also dubbed the prime minister as being "the 'Naukri Vinash' PM" claiming that in 2018 India lost over 1.1 crore jobs and said Modi is the first premier whose legacy will be of a job destroying PM" built on the two "Tughlaqi farmans" of demonetisation and "Gabbar Singh Tax", referring to Goods and Services Tax (GST).

"The leaked NSSO survey reports that the unemployment rate reached a 45-year high of 6.1 per cent in 2017 (nearly tripled from 2012), with the youth being the worst sufferers of the government's surgical strikes on jobs and the economy," he said.