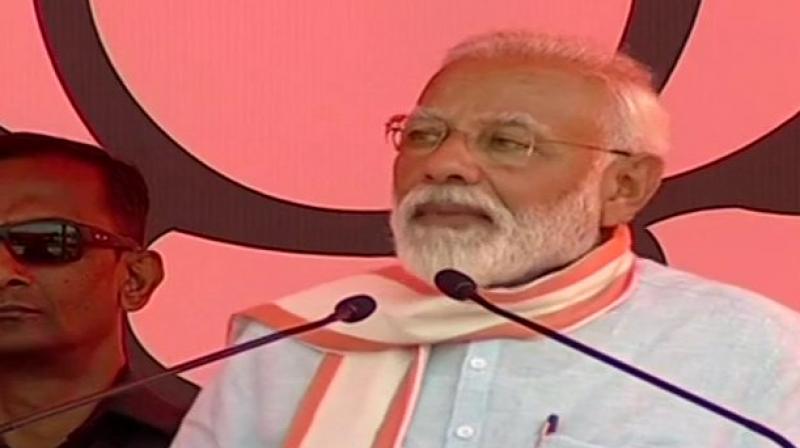 Narendra Modi said,'Congress supports those who are inclined to Pakistan'. (Photo: ANI twitter)

Kurukshetra: In a jibe at Rahul Gandhi who had said he has love and affection for him, Prime Minister Narendra Modi on Wednesday listed the "curses and foul language" used against him by opposition parties, mainly the Congress.

"Before I became the Prime Minister, a leader from Congress called me an insect, another leader called me a mad dog. I was also called Bhasmasur, monkey, virus, Dawood Ibrahim, Hitler, rat, bloody man, trader of untruth, Ravana, snake, scorpion, bad man and poisonous person. They even called me a trader of death," he said addressing an election rally here.

Further going on to list some other descriptions used against him, he said, "When I became the Prime Minister, I was called 'jawano ke khoon ka dalaal, Mussolini, Gadaffi, Hitler, mentally disturbed, neech. They called me worthless, worse than Aurangzeb, dishonest, Natwarlal. They even abused my mother by asking who was my father."

He said "This is the truth of their dictionary of love. We hope that this dictionary does not get into the hands of children," in an apparent reference to Gandhi who had told him that he had love and respect for him despite his attack on his father as "brashtachari no 1".

During the aerial strikes, when India entered Pakistan and killed the terrorists and one of "our brave sons" was captured by Pakistan, they (Pakistan) had to release him within 48 hours. They came to see him off at the Wagah border," said PM Modi.

"Many rivers go to Pakistan from India but sadly this water belongs to our farmers. Congress failed to do anything on this but your chowkidar will ensure that every Indian farmer gets every drop of water. The water from Indian rivers will not go to Pakistan," the Prime Minister sa

Referring to Gita, Modi said, "Lord Krishna has said that one should always work because it is always good to do something than do nothing. I dedicated my life to the people of India and am working for their sake."

"In the last five years, we have worked to ease our life of common people. And that became possible dur to people's vote in 2014. On May 12 your vote on lotus will strengthen the country. We will take forward our country keeping intact its values and knowledge. Here Manohar Lal khattar's government organised Gita International, Gita anniversary.

"Small farmers are now getting money in their bank accounts. We are also working to form national traders Association to help small traders. We are planning to give pension to small farmers and farm labourers with a pension as they age 60 years."