On Pangong Tso is concerned, there has been no major disengagement move yet by Chinese troops 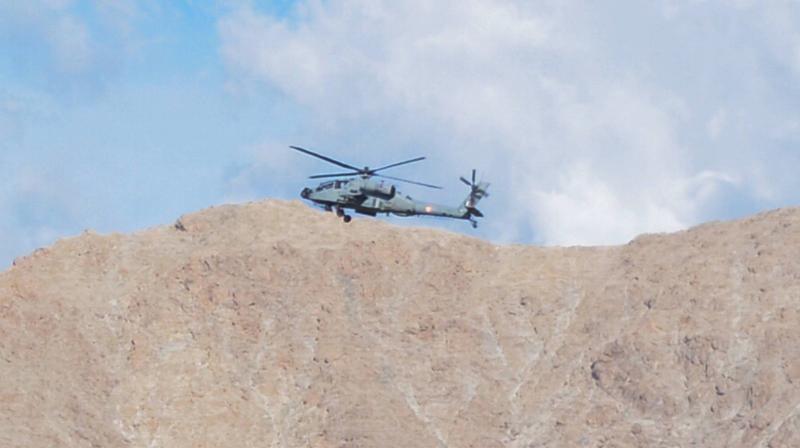 An IAF chopper flies in the skies of Leh in Ladakh. PTI photo

The Indian and Chinese armies continued their disengagement process on Tuesday in a bid to resolve their two-month standoff in Ladakh. India expects the Chinese PLA to complete its disengagement from the Hot Springs flashpoint by Tuesday night or Wednesday morning, and move back its forces by around 1.5-2 km.

In the Galwan region, Chinese troops on Monday moved back around 2 km from Patrolling Point 14, the site of the June 15 clash. Satellite images by individual open source intelligence on Tuesday confirmed Chinese troops had vacated the Galwan areas.

In Gogra Post, the disengagement by Chinese troops is expected to be complete in 2-3 days. The Indian Army will do a verification to confirm the Chinese disengagement from these points.

Sources said that under the agreement between the corps commanders, a buffer zone of at least 1.5 km on both sides of the LAC mustbe created in all the standoff areas.

The buffer zones are being set up as both armies were in an eyeball-to-eyeball position and it increased the risk of clashes between the two sides. There will be some restriction on patrolling in the buffer areas for some time and these zones will be monitored via drones and satellites.

On Pangong Tso is concerned, there has been no major disengagement move yet by Chinese troops. On Monday, some Chinese troops moved from Finger 4 towards Finger 5, but it was not significant, sources said. Pangong Tso is likely to remain a sticky point between the two armies for some more time.

Once the buffer zones are stabilised and confirmed by both sides (likely this week), the two corps commanders will meet again to discuss further steps for de-escalation. The next step will be moving out forces from the depth areas and in the final step restoring the status quo of April 2020.

Some analysts expressed concern that by stopping Indian troops from patrolling till PP-14 there has been a change in the status quo. Sources said, however, that patrolling by Indian soldiers will resume after all the phases of disengagement are over.