The second wave of the pandemic, that claimed over one lakh lives, damaged the image of the Prime Minister and his government 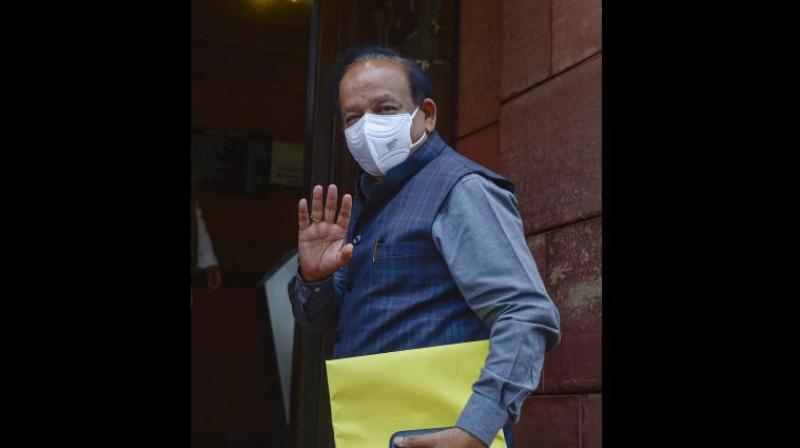 The apparent mishandling of the second wave of the Covid-19 pandemic finally cost the “good doctor”, Harsh Vardhan, his portfolio. (PTI)

The apparent mishandling of the second wave of the Covid-19 pandemic finally cost the “good doctor”, Harsh Vardhan, his portfolio. Dr Vardhan submitted his resignation from the Union council of ministers ahead of Wednesday evening’s swearing-in ceremony at Rashtrapati Bhavan. The second wave of the pandemic, that claimed over one lakh lives, damaged the image of the Prime Minister and his government both nationally and internationally. The second wave also exposed simmering cracks in the health infrastructure and the failure of the administration to provide basic healthcare like oxygen cylinders. The vaccine crisis in the early phases of the second wave also hit Dr Vardhan hard.

If the devastating Covid-19 second wave cost Dr Vardhan his job, the snowballing Twitter controversy over the new information technology rules sealed Mr Prasad’s fate. Sources also said that the attempts to regulate the OTT platforms boomeranged for Mr Javadekar. While Dr Harsh Vardhan was reportedly told to put in his papers a day before the reshuffle, the move to drop him caught Ravi Shankar Prasad by complete surprise. The sources said Mr Prasad was sitting with some people in his office when he received “the call” at around 12 noon today. The mood in the room immediately changed and Mr Prasad swiftly “left for home”.

Armed with the new IT guidelines, Mr Prasad had set out to discipline the social media, particularly Twitter. Following the farmers’ movement and the alleged “misuse” of the so-called toolkit, the Indian government had virtually locked horns with Twitter. The situation with the micro-blogging platform led to Mr Prasad’s account being temporarily blocked for a few hours, allegedly over complaints of a violation of the US Digital Millennium Copyright Act.

Speculations is rife that information and broadcasting minister Prakash Javadekar had to go as complaints from the film industry poured in after he tried to regulate OTT platforms. Mr Javadekar had claimed that he received complaints that two Amazon Prime shows -- Tandav and Mirzapur -- had “hurt religious sentiments”. However, sources close to Mr Javadekar denied that this was the reason for his removal but did not give any further details.

As the Covid-19 situation worsened in India, the health ministry kept getting embroiled in controversies one after another. Dr Harsh Vardhan came under severe criticism from within the party and outside when he went after former Prime Minister Dr Manmohan Singh. On April 18, the former PM had written a letter to Prime Minister Modi suggesting a few changes to the country’s vaccination strategy. Dr Harsh Vardhan lost his cool, and not merely sent out a stinging response to the former Prime Minister but also tweeted saying that “History shall be kinder to you Dr Manmohan Singh ji if your offer of ‘constructive cooperation’ and valuable advice was followed by your @INC leaders as well in such extraordinary times.” His response stunned even his colleagues within the party and government and did not sit well with the BJP leadership.