The voting would be held from 9 am to 4 pm on Tuesday; the counting will be held from 5 pm, an hour after the end of polling. 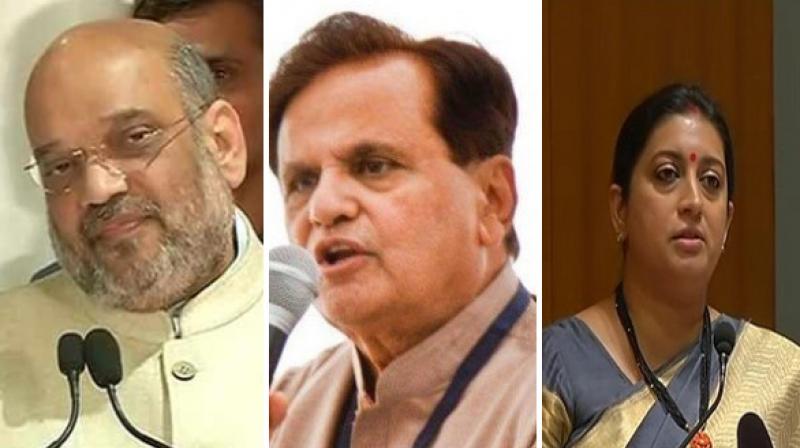 Ahmedabad: Former Congress leader Shankersinh Vaghela on Tuesday asserted that he did not vote for the saffron party Rajya Sabha candidate Ahmed Patel, adding that there was no point for the grand old party as they are never going to win the elections.

"The entire nation will face the impact and effect of this election. I tried to explain a lot to the Congress party before the elections, they didn't listen, following which I left the party. Now when the Congress Party is not going to win the elections, there was no point giving my votes to it," Vaghela told the reporters after casting his vote.

Expressing sorrow for not voting for Patel, Vaghela further said the Congress party shouldn't have put the reputation of the former on stake, when the party knew that their MLAs were resigning.

"It is not even sure that all the 44 MLAs of the Congress will vote for the same person, they may also do cross voting. That's why there is no chance of the Congress Party winning this seat. So, I have not given my vote to Ahmed Patel," he said.

However, Vaghela did not confirm whether he voted for the Bharatiya Janata Party (BJP) candidate or opted for NOTA (none of the above).

"There are only two parties in Gujarat - Congress and BJP. If I'm not with Congress, you know where will I be," Congress MLA Raghavji Patel said after casting his vote for BJP.

Congress MLA Dharmendra Jadeja asserted that the Congress party hasn't been listening to their leaders for a year and hence he voted for BJP.

In a political battle between the two Bharatiya Janata Party (BJP) and Opposition Congress, Gujarat is witnessing one of the most awaited Rajya Sabha election.

There are three Rajya Sabha vacancies from Gujarat but there are four candidates in the fray — three from the BJP and one from the Congress. BJP President Amit Shah, one of the four contestants for the three vacant seats will stand against Ahmed Patel from Congress.

As per the current strength of the Gujarat Assembly each candidate requires a minimum of 45 votes to win. With the BJP having 121 seats out of the 182 seats its two candidates Shah and Irani will win smoothly. But it is going to be a contest between Patel and Rajput.

The Congress had transported its 44 MLAs to the party-ruled Karnataka fearing defections. Eight of the 57 MLAs of the Congress have resigned from the party; this includes former Chief Minister Shankersinh Vaghela and his son.

Presently the MLAs are back in Gujarat and are in a resort in Anand. Congress candidate Ahmed Patel speaking to reporters in Anand said, “I am confident of winning the Rajya Sabha seat. All the MLAs are with me despite the BJP trying to break the MLAs.”

He also added that “I have just got word that two NCP MLAs will also be voting for me.” Reports further suggest that the lone JD(U) legislator will be extending support to Patel.

Hitting back at the Congress, the Gujarat Chief Minister Vijay Rupani said, “BJP will win all the three seats and Ahmed Patel will definitely lose.”

The voting would be held from 9 am to 4 pm on Tuesday.

The counting will be held from 5 pm, an hour after the end of polling.

The election has been necessitated following the completion of the tenures of three existing members - Union minister Smriti Irani, Dilip Pandya of BJP and Ahmed Patel of Congress.

Congress needs the support of 45 MLAs for victory of Patel who is contesting for his fifth term for the Upper House.

In 182 member assembly, BJP has 122 seats including dissident Nalin Kotadiya.

While, Congress has 51 MLAs along with 7 of Shankarinh Vaghela's camp. NCP has 2 and JD U has 1 MLA in the house.