The magic number in Bihar Assembly is 122 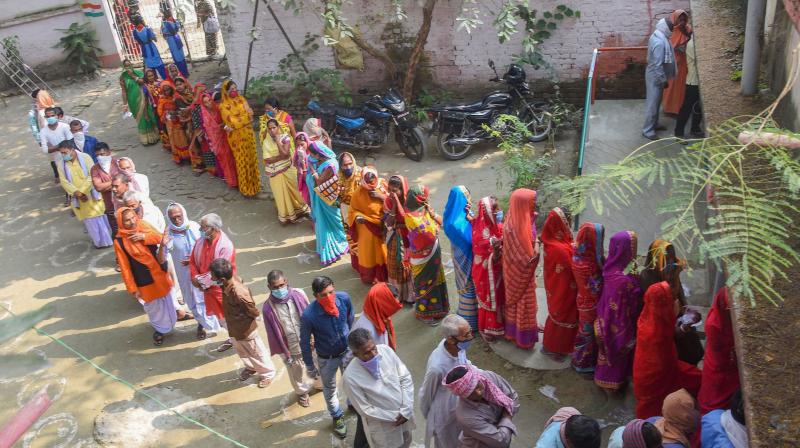 Voters stand in queues to cast their votes at a polling station during the third phase of Bihar Assembly Elections, at Mahua in Vaishali district, Saturday, Nov. 7, 2020. (PTI Photo)

New Delhi: The Tejashwi Yadav-led Mahagathbandhan has an edge over the ruling National Democratic Alliance to form the next government in Bihar, several Exit Polls predicted on Saturday soon after the final phase of polling in the state for 243 Assembly seats ended.

The exit polls predicted that the RJD-Congress’ Mahagathbandhan may get 123 seats and form the government. The magic number in Bihar Assembly is 122. According to Polls of Polls (which takes an average of various exit polls), the JD(U)-BJP’s NDA, led by incumbent chief minister Nitish Kumar, will manage to get 110 seats, the Chirag Paswan-led LJP will bag just four and others put together with Independ-ents will get five seats.

Some pollsters indicated the results, which will be out on Tuesday, could swing either way, even hinting at a hung Assembly.

Today’s Chanakaya was completely off the mark in predicting 2015 Bihar Assembly results and had to apologise for going wrong like all other pollsters.

This time, as per Today’s Chanakaya, the RJD and the Congress, along with their Left allies, are expected to bag 44 per cent vote share, the JD(U) and BJP will get 34 per cent while others may get 22 per cent (with a margin of error of 3 per cent). It further said that 35 per cent of voters cast their vote against the present dispensation beca-use of unemployment, while 37 per gave poor ratings to Nitish Kumar and 63 per cent said they wanted a change in government.

In its pre poll predictions, News 24-Chanakya had given the NDA 155 seats and 83 to Mahagathbandhan.

The high-pitched battle in Bihar that came to an end with the completion of three phase polling on October 28, November 3 and 7, saw RJD leader Tejasawi Yadav taking the lead in harnessing anger against the JD(U)-BJP dispensation. Unemployment, Covid-19 and migrant workers remained the focus of his campaign even as Nitish Kumar tried all sorts all tricks to woo voters.

The JD(U) was an ally of the RJD and the Congress in the Mahagathbandhan during the 2015 Assembly polls. But this time, after Nitish Kumar broke alliance and joined hands with the BJP midway, the two targeted Tejasawi Yadav and the RJD.

In pre-poll surveys, News X-CNX had predicted 130-140 seats for the Mahagathbandhan, while ABP News gave it 130 seats. The C-Voter had given an edge to Nitish Kumar with 112-132 seats and News Nation favoured Nitish Kumar with 120-124 seats. The ITG-Cicero poll by India Today had predicted 113-127 seats for the NDA and 111-123 for the Mahagathbandhan.