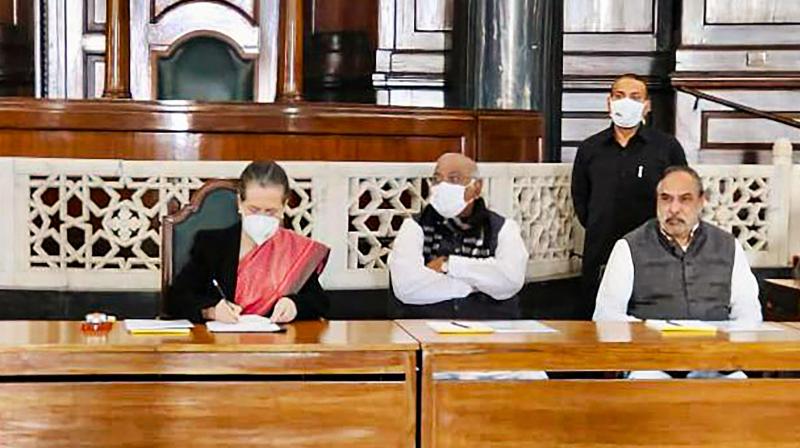 New Delhi: Congress President Sonia Gandhi on Wednesday hit out at the Modi government over issue of price rise, farmers' demands and tension at the borders, and said her party will insist on a discussion in Parliament on challenges facing the agri sector and the border situation.

Addressing party MPs at the meeting of the Congress Parliamentary Party (CPP), Gandhi also expressed deep anguish over the killing of 14 civilians in Nagaland, and said justice for families should be ensured at the earliest.

She also raised the issue of suspension of 12 Rajya Sabha MPs, terming the move as "outrageous", and said it is unprecedented that they have been suspended for the remaining period of the Winter session.

"It violates both the Constitution and the Rules of Procedure and Conduct of Business in the Council of States, as Mallikarjun Kharge ji has explained in his letter to the Chairman of the Rajya Sabha," she said, adding that they all stand in solidarity with them.

Congress MPs of both houses of Parliament and former Congress president Rahul Gandhi were present during the meeting in the central hall of Parliament.

The Congress president said it was extraordinary that Parliament has not been given an opportunity so far to have a discussion on the challenges the country continues to face on its borders.

"Such a discussion would have also been an opportunity to demonstrate a collective will and resolve. The government may not want to answer difficult questions but it is the right and duty of the Opposition to seek clarifications and explanations.

"The Modi Government steadfastly refuses to allocate time for a debate. I would once again urge for a full-fledged discussion on the border situation and relations with our neighbours," Gandhi told the meeting.

The Congress chief said the Government has finally repealed the three farm laws, even it was done "undemocratically just as their passage last year was pushed through without discussion".

She said it is the solidarity and tenacity of the farmers, their discipline and dedication that has forced an "arrogant Government to climbdown".

Saluting the farmers for their achievement, Gandhi remembered the sacrifice of over 700 farmers in the past 12 months and called for honouring their sacrifice.

"We are firm in our commitment to stand by the farmers in their demands for a legally guaranteed MSP, remunerative prices that meet the costs of cultivation, and compensation to the bereaved families," she said.

Raising the issue of price rise, she said, "I cannot understand how and why the Modi Government is so insensitive and continues to deny the seriousness of the problem. It seems impervious to the suffering of the people."

She also termed the steps taken to reduce petrol, diesel, and cooking gas prices as totally insufficient and inadequate and said government has passed on the responsibility for duty cuts to financially strapped state governments instead.

"And all this while, the Centre persists with huge public expenditure on vain glorious projects," she said, while making a veiled reference to the central vista project.

"First, the prime minister destroyed the economy with his demonetisation move of November 2016. He is continuing on that disastrous path, but calling it monetisation. Now, he is dismantling the public sector built up over the past seventy years with strategic, economic and social objectives in mind," she said.

Hitting out at the government for claiming economic recovery, Gandhi said, "Recovery for whom is the real question? It means nothing to those millions who have lost their livelihoods, and to those MSMEs whose businesses have been crippled not just by the COVID-19 pandemic but also by the combined effects of 'notebandi' and the hasty implementation of a flawed GST."

She said a few big companies making profits or the stock market rising to new heights does not mean that the economy is recovering. "And if profits are being made by shedding labour, what social value do these profits have," she asked.

On the Covid situation, she said, the sad reality is that the country is nowhere close to reaching the level of double-dose vaccination announced by the Government for the end of the year.

Efforts must clearly be intensified and the daily vaccination dose has to increase four-fold so that 60 per cent of the population is covered with both doses, she said, hoping the Government has learnt a lesson from the previous waves of Covid and is preparing itself to dealing effectively with the new variant.

"There are many other issues that we want to raise. Important amongst them, are a discussion on the various challenges confronting Indian agriculture and the urgent need to have direct income support to families who have lost their livelihoods. We must insist on it," she said.

On the Nagaland firing incident, she said, "The Government expressing regret is not enough! Justice for the families of the victims has to be ensured at the earliest. Credible steps must be taken to prevent the recurrence of such ghastly tragedies"