The ruling Akali Dal-BJP alliance was reduced to single digit tally in all exit polls. 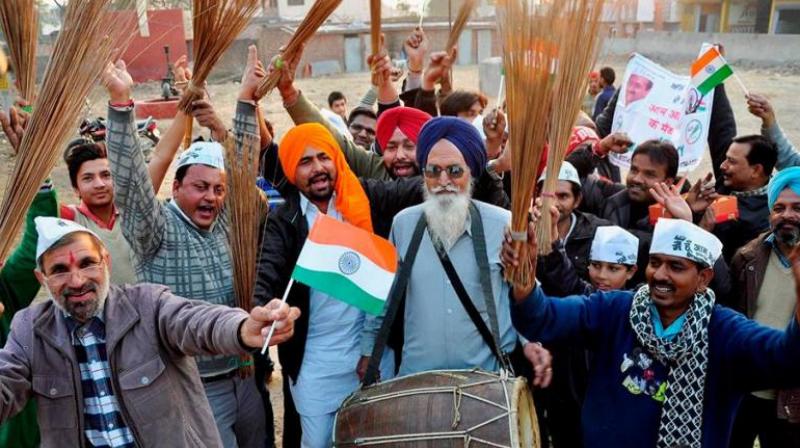 Chandigarh: Punjab, which witnessed a triangular contest in the Assembly polls, could be in for a neck and neck fight between the Congress and the AAP while the ruling SAD-BJP may face a drubbing, according to pollsters.

Exit polls released ahead of the March-11 counting predict the SAD-BJP combine, which has been ruling the state for 10 years, could be struggling to get even into double-digits in the 117-member House due to multiple factors including the anti-incumbency.

India News-MRC and News 24-Chanakya forecast a dead heat giving 55 to the Congress and 54 to the AAP.

The ruling Akali Dal-BJP alliance was reduced to single digit tally in all exit polls.

Away from the hustle and bustle of the exit polls, the SAD-BJP alliance is confident of defying the pollsters "like in 2012", when it proved the surveys wrong.

As for Congress, Amarinder Singh claimed it would win 65 seats and the AAP exuded confidence of bagging close to 100.

1,145 candidates are in the fray, 81 of whom are female and one transgender.

"The counting of votes will take place on Saturday (March 11) for which all necessary preparations have been made," an election office spokesman said here today.

It was a record for the state when the SAD (with BJP) came back to power in 2012 as no party had ever been given two consecutive terms.

Since reorganisation of Punjab in 1966, the Congress and the SAD have been ruling the state alternately. The SAD-BJP alliance formed the government for the first time in 2007 and retained majority in 2012.

This time around, while the SAD is contesting 94 seats the BJP is 23. The Congress has contested all the seats.

The AAP and its ally Lok Insaf Party, led by the Bains brothers of Ludhiana, are fighting 112 and 5 seats respectively. With over 30 per cent of the Dalit population, Punjab also saw BSP supremo Mayawati campaigning for her party candidates. The Apna Punjab Party and the Left parties too are confident of making some inroads.

Key constituencies whose results would be keenly watched include the Lambi seat, where the CM is locked in a triangular contest with Amarinder Singh and journalist-turned-politician Jarnail Singh (AAP).

Patiala is another key seat where Amarinder Singh is up against SAD candidate and retired army chief General JJ Singh.

Navjot Singh Sidhu, who after several flip-flops had joined the Congress party, contested the Amritsar East seat against Rajesh Kumar Honey of BJP.

The state polls are also a test of Prime Minister Narendra Modi with some dubbing them as referendum on his popularity and on demonetisation.

The results are crucial for Congress, which is seeking to wrest power after failing in previous two Assembly elections fought under the leadership of Amarinder Singh.

The party's prospects, however, have been hit by infighting.

Meanwhile, after witnessing a high-profile battle between political stalwarts-- BJP's Arun Jaitley and Congress' Amarinder Singh in 2014-- the Amritsar Lok Sabha bypoll was overshadowed by the Assembly polls this year.

The by-poll to Amritsar seat was necessitated after Amarinder Singh resigned in protest against the Apex court's verdict on the SYL canal issue.