Our 'NYAY' to undo the 'anyay' of Narendra Modi govt: Rahul

Rahul said the proposed scheme, 'NYAY', was a realistic measure that could be implemented without harming economy. 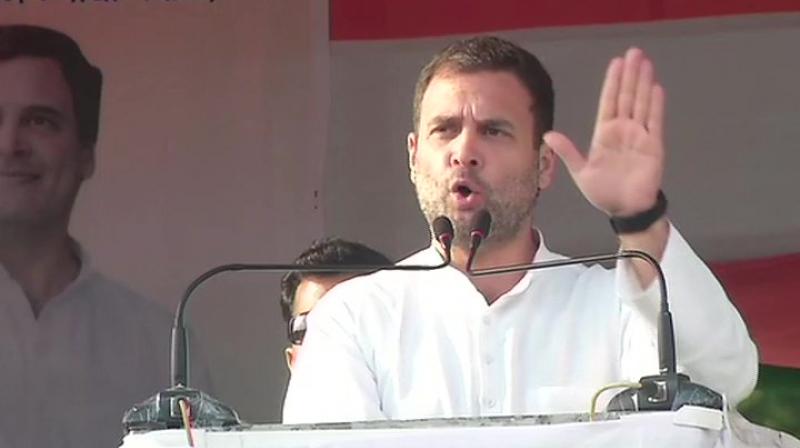 Attacking Modi over his chowkidar claim, Gandhi said the poor cannot hire a watchman, a luxury only the wealthy can afford. (Photo: ANI)

Gaya: Congress chief Rahul Gandhi Tuesday launched a frontal attack on Prime Minister Narendra Modi, saying his party has come up with "NYAY" (justice), a reference to the proposed minimum income guarantee scheme, to undo the "anyay" (injustice) done by the Centre.

He said the proposed scheme, known by the acronym "NYAY", was a realistic measure that could be implemented without harming the economy or increasing the tax burden on the common people "unlike the boastful promise made by Modi of remitting Rs 15 lakh into the bank accounts of all poor people in the country".

He accused Modi of spreading the "canard" that NYAY will be an expensive scheme to implement which the Congress would not find enough funds unless more taxes are imposed on the salaried class.

"I promise that the scheme would be implemented no sooner than the party comes to power and we would get the money out of the pockets of people like Anil Ambani, Nirav Modi and Mehul Choksi the role of whose chowkidar (watchman) Modi has assumed," Gandhi told an election rally here.

The Congress president was speaking in the presence of actor-politician Shatrughan Sinha, who recently joined the party after quitting the BJP, and local "Mahagathbandhan" candidate and former Bihar chief minister Jitan Ram Manjhi, among others.

Attacking Modi over his chowkidar claim, Gandhi said the poor cannot hire a watchman, a luxury only the wealthy can afford. He alleged that Modi was a watchmen only to big businessmen like Nirav Modi, Ambani and Choksi.

Gandhi's remarks were greeted with chants of "chowkidar chor hai" (the watchman is the thief) by the audience.

"This chant of 'chowkidar chor hai' is reverberating across the country and has replaced the 'ache din aane wale hain' (good days are to come) slogan that Modi gave five years ago. Rattled by this changing political mood, he has come up with yet another rhetoric main bhi chowkidar (Im too a watchman).

"Modi should know his cohorts may be with him in this drama but not the farmers, the workers and the unemployed youth," the Congress president said at the rally that concluded just before the campaign for the first phase of polls on April 11 came to a close.

Gandhi also scoffed at Modi for his aggressive nationalistic stance during the poll campaign and targeted him over the Rafale deal.

The Congress leader said as part of the understanding reached with France under Manmohan Singh the fighter jets were to be manufactured by the Hindustan Aeronautics Limited. "Modi said, no, I am a chowkidar of Anil Ambani and hence the contract would go to his company despite it not having the knowhow. So much for his patriotism," Gandhi said.

He claimed farmers who have taken loans live in fear that they may be jailed for defaulting on repayment.

This is despite the fact that big-time defaulters have been able to flee the country with outstanding loans of thousands of crores of rupees, he said.

We will ensure that no farmer is made to suffer on account of inability to repay loans, Gandhi asserted.

"We waived the loans of farmers in states like Madhya Pradesh, Chhattisgarh and Rajasthan. Measures like these and promises like NYAY are just the beginning," Gandhi added.