A virtual summit between Modi and the heads of 27-member states of EU focused on cooperation in trade, investment and connectivity 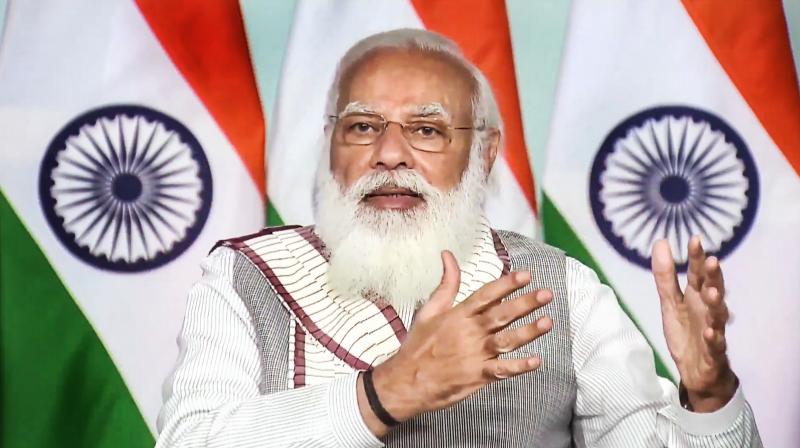 The connectivity pact will also “promote fast and effective roll-out of 5G on the basis of global standards” and enhance cooperation through “submarine cables and satellite networks”. — PTI

New Delhi: After a gap of eight years, India and the European Union (EU) on Saturday agreed to resume negotiations on a Free Trade Agreement (FTA) and a parallel investment protection agreement. Both sides also agreed on a Connectivity partnership  “covering digital, energy, transport and people-to-people connectivity” that will also include “sustainable joint projects in third countries, most notably in the Africa, Central Asia and Indo-Pacific region”.

These decisions were taken during a virtual summit between Prime Minister Narendra Modi and the heads of state or government of all the 27-member states of the bloc with a focus on expanding overall cooperation in areas of trade, investment and connectivity.

European Commission chief Ursula von der Leyen hailed the decision to restart trade talks after an eight-year break as a "landmark moment”. She also said that since 2013 “nothing happened” in the trade talks as the Modi government came to power and wanted to begin the talks afresh.

The connectivity pact will also “promote fast and effective roll-out of 5G on the basis of global standards” and enhance cooperation through “submarine cables and satellite networks”. In a veiled message to China, both sides also underlined their commitment to a free, open, inclusive and rules-based Indo-Pacific region and discussed action to combat climate change.

Participating virtually as a “special invitee” in the two hour-long India-EU Leaders’ Meeting that was attended by European Council President Charles Michel and leaders of the 27 EU member-nations at Porto, Portugal, hosted by its Indian-origin PM Antonio Costa, PM Modi “welcomed the growing convergences between India and the EU on regional and global developments" and thanked the EU’s swift aid to India to tackle the raging pandemic. He also requested the EU’s support for the India-South Africa proposal for a TRIPS waiver on vaccine production-related patents, adding that the EU’s support at WTO for this waiver “will ensure that we can scale up the vaccine production for equitable and global access and save lives”.

EU countries are sending medical equipment and drugs worth an estimated $120 million to India as part of international efforts to help it fight Covid-19.

MEA’s secretary (West) Vikas Swarup said, “Negotiations on both the Trade and Investment Agreements will be pursued on parallel tracks with an intention to achieve early conclusion of both of them. As you know, the negotiations were suspended in 2013 after several rounds of talks spanning six years. Both sides have worked intensively over the last few months to arrive at a common understanding.”

On the connectivity pact, the joint statement said, “We launched today a sustainable and comprehensive Connectivity Partnership that upholds international law, conforms with international norms and affirms the shared values of democracy, freedom, rule of law and respect for international commitments.” A separate document on the partnership added, “The Partnership will support sustainable digital, transport and energy networks, and the flow of people, goods, services, data and capital centred on equity and inclusivity....”

Both sides also welcomed the resumption of the India-EU Human Rights Dialogue earlier this month as per a decision reached last year.