Naidu went on to say that the principles of management are equally applicable in aspects of public administration. 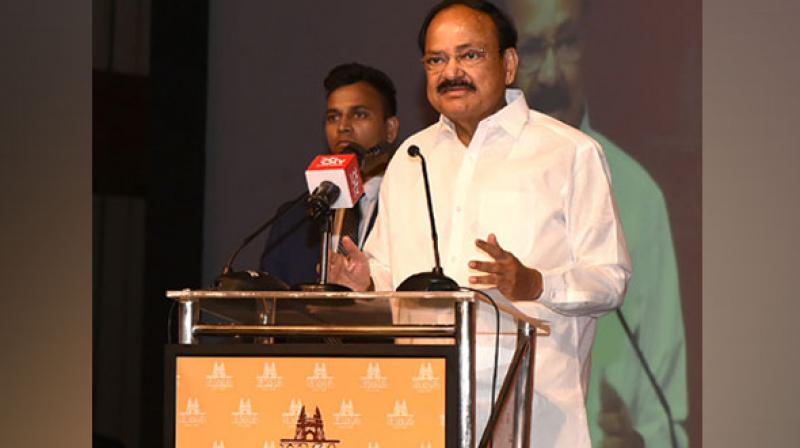 Speaking at the Hyderabad Management Association's 46th Annual Awards function in Hyderabad, the Vice President called for the 'disturbing trend' of lowered political discourse to be reversed. (Photo: ANI)

Hyderabad: Voicing concern about political discourse in India reaching a 'new low', Vice President Venkaiah Naidu on Saturday said the country's legislatures, instead of becoming effective forums of debate, are being reduced to "disruptive platforms."

Speaking at the Hyderabad Management Association's 46th Annual Awards function in Hyderabad, the Vice President called for the 'disturbing trend' of lowered political discourse to be reversed.

"We are witnessing another type of disruption, which unfortunately is becoming increasingly commonplace. Our legislatures, instead of becoming effective forums of debate, are being reduced to disruptive platforms. This growing tendency, in my view, is a clear negation of the vision of our Constitutional makers. In a way, it is an affront to the spirit of the Constitution of India. It is apathy towards the hopes and aspirations of the people. It is utter disregard for people's mandate. It is a betrayal of the people's faith in these pillars of democracy," he noted.

Naidu continued, "It is a matter of concern that political discourse is reaching a new low in recent years. We should reverse this trend at the earliest. A credible opposition is an essential prop for a healthy democracy."

Quoting former President Pranab Mukherjee's slogan - discuss, debate and decide but not disturb - Naidu said it is important for those in the public sphere to understand that they are rivals, not enemies.

Naidu, who is also Chairman of the Rajya Sabha, said the functioning of Parliament and state legislatures has become "worrisome" owing to frequent disruptive and dysfunctional tendencies.

"People need to monitor the functioning of the legislatures and also the conduct of various parties and the elected representatives," he said, adding, "People elect their representatives hoping that they would articulate their hopes and aspirations in the legislatures and do the needful by way of making laws and raising issues of public importance so as to make a difference to their lives. Dysfunctional legislatures strengthen the demand for recall of legislators. I am afraid that we are moving towards that stage."

The Vice President called for fast-tracking of cases dealing with criminal cases against politicos.

"As Chairman of the Rajya Sabha, I have tried to be objective and judicious in my response to cases of violation of anti-defection laws. These cases, in my view, require to be dealt with speed and alacrity to uphold the best democratic traditions. Election petitions and criminal cases against political leaders must be decided quickly by special benches of higher courts in a time-bound manner. If need be, separate benches may be set up to expedite such cases within six months or one year," he added.

Shedding light on the economic and administrative reforms initiated by Prime Minister Narendra Modi for tackling the menaces of corruption and black money, Naidu said that owing to these reforms, India has emerged as a top destination for investments in the world.

"India is today one of the favourite destinations for investments and has become the most attractive emerging market. There is a need to further accelerate reforms as India forges ahead to become the third largest economy in the coming years," he said.

"According to the Department for Promotion of Industry and Internal Trade (DPIIT), FDI equity inflows in India in 2018-19 stood at USD 44.37 billion, indicating that government's effort to improve ease of doing business and relaxation in FDI norms is yielding results. As per a report of UBS, annual FDI inflows in the country are expected to rise to USD 75 billion over the next five years. We are poised to become a USD 5 Trillion economy in a decade," Naidu added.

Naidu went on to say that the principles of management are equally applicable in aspects of public administration.

"Every official in the bureaucracy must remember the face of the common man and strive to bring a smile on his face. The time also has come to rejuvenate the bureaucracy by introducing reforms in selection and cadre allocation and making in-service training mandatory for officials at all levels," he said.

"The performance management systems in the bureaucracy can be enhanced with greater focus on outcomes and by recruiting more young people into the system. It is also important to ensure that appointments to important positions are apolitical," he added.

The Vice President called for public and private sectors in India to work in tandem to complement each other and to learn from each other's experience. "The public sector has to utilise the private sector's expertise in technology, automation, digitisation and the ease with which they adopt innovations and adapt quickly to the changing times. The private sector can learn from the best practices of some the reputed public sector organisations," he said.