The state had registered 17 lakh beneficiaries under the scheme and 1.46 lakh people were given treatment for various diseases. 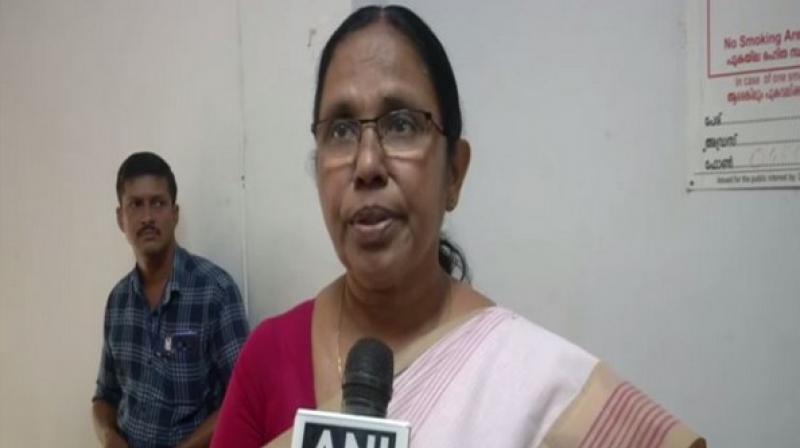 ‘The prime minister has misunderstood the state in this regard; he may correct his statement since Kerala is a member of the scheme and signed the MoU (Memorandum of Understanding) on November 2, 2018,’ Kerala Health Minister K K Shailaja. (Photo: ANI)

Thiruvananthapuram: Joining issue with Prime Minister Narendra Modi over his appeal to it for joining Ayushman Bharat, the LDF government in Kerala has said the state is already a member of the Centre's health insurance scheme and the PM has "misunderstood" it.

Asking the prime minister to correct himself, state Health Minister K K Shylaja said that “in fact, the Kerala government had extended its coverage from 18.5 lakh families to 41 lakh families by integrating the other existing schemes under the title "Karunaya Arogya Surakha Scheme."

Speaking at a BJP meeting in Guruvayur on Saturday, Modi urged the Pinarayi Vijayan government in Kerala to implement the flagship health insurance programme of the Centre. Reacting to it, Shylaja, in a statement here, said Kerala was already a member of the scheme.

She pointed out that Modi had said it was unfortunate that Kerala did not join the scheme and therefore, many poor people of the state would not get its benefits. "The prime minister has misunderstood the state in this regard; he may correct his statement since Kerala is a member of the scheme and signed the MoU (Memorandum of Understanding) on November 2, 2018," the health minister said.

She further said the state had received Rs 25 crore as the first instalment (from the Centre) and Chief Minister Vijayan had inaugurated the state-wide distribution of health cards under the scheme on March 5.

The minister also said the state had registered 17 lakh beneficiaries under the scheme and 1.46 lakh people were given treatment for various diseases. However, she added that the southern state had apprehensions about the scheme as it covered only 18.5 lakh families, leaving out many deserving people. "Therefore, the Kerala government expanded and strengthened the implementation of the project by adjoining other existing health insurance schemes into it under the title -- Karunaya Arogya Surakha Scheme, which comprises 41 lakh families," Shylaja said.

Billed as the biggest government-sponsored healthcare scheme in the world, Ayushman Bharat was launched by the Modi government in September last year, envisaging a coverage of Rs five lakh per family annually to more than 10 crore poor families.