This comes after Siddaramaiah declares that he has sought for the disqualification of rebel MLAs and also ban from contensting for 6 years. 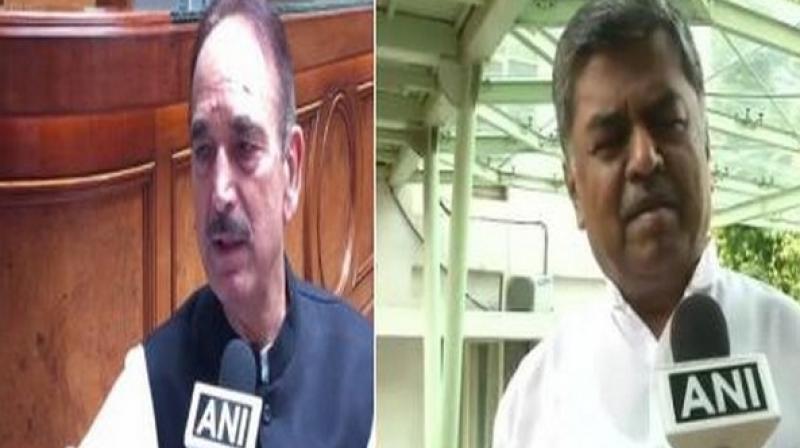 The Congress-JDS coalition government has slumped into a major crisis after 11 Congress MLAs resigned from the membership of Assembly on July 6. (Photo: ANI)

New Delhi: As the political crisis assumes critical proportion in Karnataka, the party leadership on Tuesday tasked senior leaders -- Ghulam Nabi Azad and BK Hariprasad - to salvage the situation and save the coalition government.

"The two leaders will talk to party MLAs and leaders and try to defuse the crisis. They will also hold talks with the leaders of Janata Dal-Secular," sources said in New Delhi on Tuesday.

The Congress-JDS coalition government has slumped into a major crisis after 11 Congress MLAs resigned from the membership of Assembly on July 6.

Congress leader Siddaramaiah on Tuesday said that they would seek the disqualification of the disgruntled legislators for their anti-party activities.

After the Congress Legislative Party (CLP) meeting, the party has also urged Speaker KR Ramesh Kumar to ban these MLAs, who have "colluded" with the BJP, from contesting elections for at least six years.

"The CLP has decided to submit a petition to the Speaker seeking disqualification of the members who are trying to resign from their membership. Not only to disqualify them, but they shall not be allowed to contest the election for the next six years," Siddaramaiah told reporters after the meeting.

"According to us, what they have done amount to anti-party activities and they have colluded with the BJP. These people are trapped. Even now I request them to come back, withdraw their resignations. The party has taken a decision requesting their disqualification," he added.

"I don't know if they have understood the law or not, the anti-defection law. It clearly says in Article 164, Clause 1 and 2, whoever resigns from a political party who is elected under the symbol of the party cannot resign. He will be disqualified and once that happens, he cannot hold any office. This is the position of the law," he added.

The former Karnataka Chief Minister claimed that it was the BJP's sixth attempt to "destabilise" the state government in the last 13 months.

"This is their (BJP) sixth attempt to destabilise the government. In this attempt, not only is the state BJP involved but Home Minister Amit Shah and Prime Minister Narendra Modi are also involved. Under their directions, the BJP in Karnataka is putting efforts to destabilise this government," alleged Siddaramaiah.

"This is against democracy and against the mandate of the people," he added. He also alleged that BJP is offering money and ministerial berths to legislatures.

"BJP is offering money and ministerial berths. Everybody knows that even on earlier occasions that they offered money. This is why I questioned where this money came from, who has given this money. With this money and power, they are trying to destabilise a duly elected government under the provisions of the Constitution. Some of our MLAs have fallen into this trap," he said.

Speaker KR Ramesh Kumar has said that he would go by the rules while taking a call on the resignation of MLAs.

"I have certain rules. I will go by that. Then the decision will be taken. I have to be responsible. Certain things in law are implied. Office of the Speaker should behave responsibly. No time frame is mentioned there," Kumar said when reporters asked if the resignation of MLAs has been accepted.

Kumar further said: "The clause says if the Speaker is convinced that the resignations are voluntary and genuine he can accept. Otherwise, I don't know. I am not a well-read man. I have to see."

Earlier, the Speaker said that no MLA has sought any appointment with him and if someone wants to meet him, he is available in the office.

"Till now, no MLA has sought an appointment with me. If anyone wants to meet me, I will be available in my office," he told reporters. "I am no way related to the current political developments in the state. I am acting as per the Constitution," he added.