New ministers take charge, get down to business 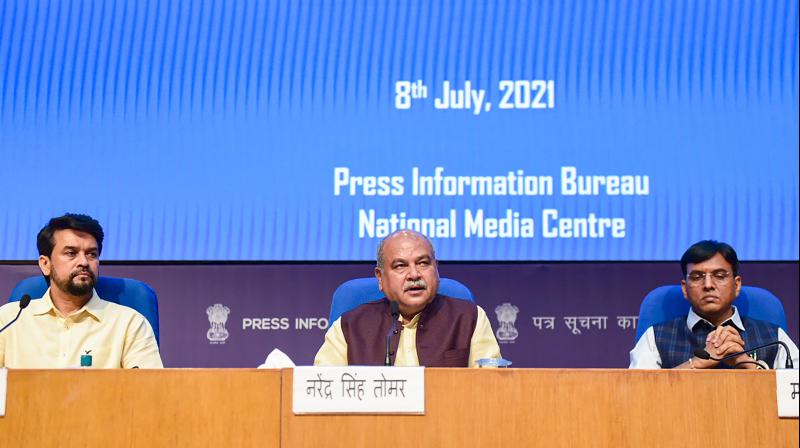 New Delhi: Prime Minister Narendra Modi’s new ministers took charge of their respective ministries on Thursday and got into working mode immediately, taking some major decisions during the Cabinet meeting. In the first major decision of the new Cabinet, the Union government approved a Rs 23,123 crore Covid-19 emergency fund to fight the pandemic. The Cabinet also approved modifications in the Central Sector Scheme of financing facilities under the “Agriculture Infrastructure Fund”.

“It has been said that Agricultural Produce Marketing Committees (APMCs) will no longer exist under the new farm laws. The government clarified that the Mandi system will not end. Instead, it will be strengthened further. In view of this, the Cabinet has approved APMC access to Agriculture Infrastructure Fund, which was announced in the Union Budget,” agriculture minister Narendra Singh Tomar said while announcing the decision. He added that in due course more resources will be provided to the APMCs. “Rs 1 lakh crore allocated under the Atmanirbhar Bharat to Farmers Infrastructure Fund can be used by APMCs,” said Mr Tomar.

“To increase coconut farming, we are amending the Coconut Board Act. The Coconut Board president will be a non-official person. He will be from the farmers' community who knows and understands the work in the field,” Mr Tomar said while giving details of the other Cabinet decision related to his ministry.

Making an announcement with regard to the Covid-19 fund, new Union health minister Mansukh Mandaviya said a Rs 23,000-crore relief package has been announced to deal with the devastation caused by the second wave of the virus and added this fund will be allocated to states after consulting them. The minister said this scheme aims to accelerate health system preparedness for immediate responsiveness for early prevention, detection and management, with the focus on health infrastructure development, including for paediatric care.

Under this, support would be provided to Central hospitals, AIIMS, and other institutions of national importance for repurposing 6,688 beds for Covid-19 management. Support will also be provided for implementation of the Hospital Management Information System in all district hospitals of the country.

Earlier, all the new ministers took charge of their ministries and met the PM and BJP president J.P. Nadda.  Former minister for state in the ministry of home affairs, G. Kishan Reddy, who has been promoted as a Union minister to head the culture and development of north-eastern region said that the kind of transformation that took place in the Northeast in the last seven years in all spheres of life under the leadership of PM Modi is incredible and he as a new minister will try to complete all the pending projects in the region within the stipulated time frame. He also thanked the former DoNER minister Dr Jitendra Singh, present at the takeover, for his stellar role in the overall development of the north-eastern region.

Former MoS finance Anurag Thakur, the new Union minister for information and broadcasting and youth affairs, sports, along with the new Union health minister and Mr Tomar, briefed the media about the decisions taken by the new Cabinet. The last Cabinet meeting was held on June 30 when former I&B minister Prakash Javadekar and Ravi Shankar Prasad had briefed the media.