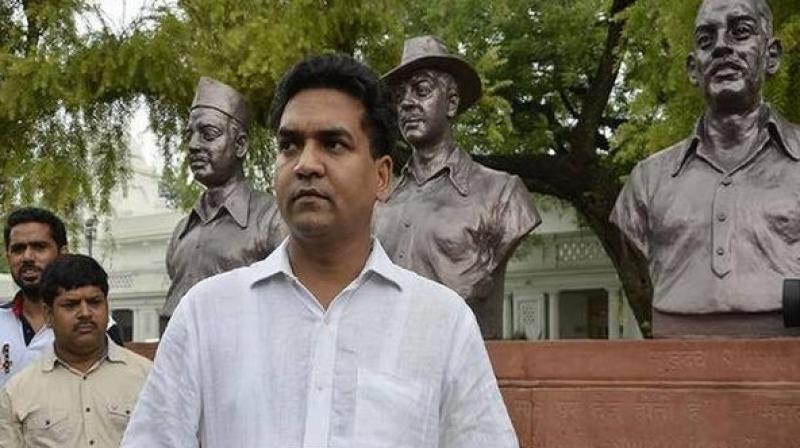 Mishra's counsel argued that proceedings and order are clearly in violation of the law of natural justice. (Photo: ANI)

Senior advocate Sudhir Nandarjog, appearing for Speaker, said several opportunities have been given to him, and a notice was issued to Mishra, on which he was to file a reply within seven days, but failed to comply with the directions.

The lawyer stated that Mishra later moved an application seeking cross-examination of the complainant. "Complaint was moved on July 1 and notice issued to him on July 10... He was provided adequate opportunity," Nandarjog said.

Mishra's counsel argued that proceedings and order are clearly in violation of the law of natural justice.

Mishra had moved Delhi High Court challenging his disqualification from the Delhi Assembly.

He had sought to quash or set aside the August 2 order passed by Delhi Speaker in defection proceedings.

"The proceedings and the order is clearly in violation of the law of natural justice and fair play, ultra vires to the 10th Schedule of The Constitution of India and being outside the purview of the 'Members of Delhi Legislative Assembly (Disqualification on Grounds of Defection) Rules, 1996'," read the petition.

The petitioner alleged that the order is violative of the 10th Schedule of Constitution of India.

Delhi Speaker has behaved like the "head of a disciplinary committee of Aam Aadmi Party and took cognizance of a petition that has no relation with the power balance in the Assembly or with the stability of the government," Mishra said.

The petition mentioned that the order has been passed contrary to the principles of natural justice, without providing an opportunity to the petitioner and without passing any order on applications filed by him from time to time.

It is submitted that despite the request of the petitioner, the respondents have not given him the opportunity to contest his case on merits and also not permitted him to lead the evidence, did not allow him to summon the witnesses (list of which was submitted by petitioner), knowingly and deliberately in a clandestine manner avoided the cross-examination of AAP MLA Saurabh Bhardwaj by the petitioner.

Delhi Assembly Speaker Ram Niwas Goel had on August 2 disqualified Kapil Mishra, who had campaigned for Prime Minister Narendra Modi during the Lok Sabha elections, under the anti-defection law.

He took the decision on a complaint filed by AAP leader Saurabh Bharadwaj earlier seeking Mishra's disqualification on grounds of defection.

"Kapil Mishra, the Respondent in this case, an elected Member of the Legislative Assembly of the National Capital Territory of Delhi, elected from Karawal Nagar, Constituency No. 70 has become subject to disqualification under Paragraph 2 (1) (a) of the Tenth Schedule of the Constitution," read a statement from the Assembly.