New Congress chief to be decided tomorrow in CWC meeting

The meeting is scheduled to take place at 11 am at the All India Congress Committee (AICC) headquarters in New Delhi. 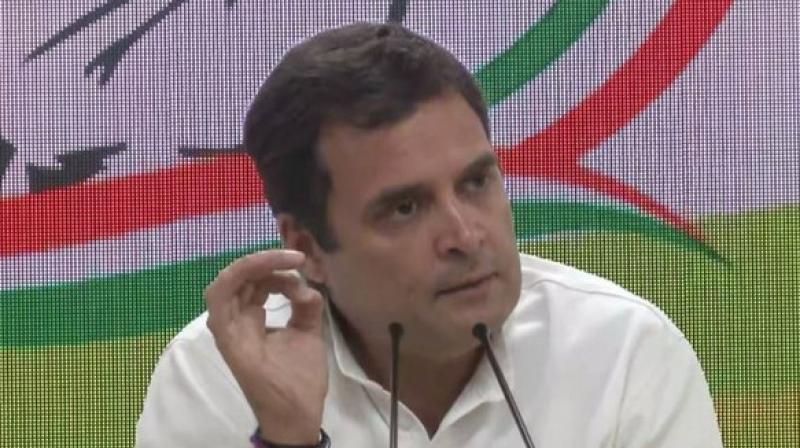 Many names are doing rounds for the post of Congress president, but no consensus has been achieved. (Photo: ANI)

New Delhi: All eyes are now on the key meeting of Congress Working Committee (CWC) which is scheduled to take place on Saturday to fill the post of party president, which has remained vacant since Rahul Gandhi announced his resignation in May.

The meeting is scheduled to take place at 11 am at the All India Congress Committee (AICC) headquarters in New Delhi. The main agenda is to decide Gandhi's successor.

A day ahead of the all-important meet, senior Congress leader Abhishek Manu Singhvi said even a "slightest delay" in choosing the party's chief is not an option.

"On Sat, a consensus builder party pres INC must be selected. Slightest delay is not an option. In lighter vein, I gave an analogy of wise men of Vatican locked in a room indefinitely until they got a nomination! Subsequently, it has to be followed by full intra party elections," he tweeted.

Many names are doing rounds for the post of Congress president, but no consensus has been achieved.

Punjab Chief Minister Captain Amarinder Singh has batted for a young leader to head the party, while Mumbai Congress chief Milind Deora suggested the name of party leaders Jyotiraditya Scindia and Sachin Pilot to take up the responsibility.

A few leaders like Shashi Tharoor have suggested that an interim president be appointed at the earliest.

Unequivocally ruling himself out of the race, Deora had recommended the names of Pilot and Scindia for the post of party president.

Concurring with the proposal made by Singh for the appointment of a young leader to the top post, Deora had told ANI that either of the two must be given the responsibility, as this will strengthen the governments in Rajasthan and Madhya Pradesh.

On being asked if the party will accept a 'non-Gandhi' president, Deora had said he does not see any reason why senior leaders would not accept Amarinder's proposal.

A lawmaker from Wayanad constituency, Gandhi had offered to step down from the post of Congress president at the CWC meeting on May 25, taking moral responsibility for the party's drubbing in the 2019 Lok Sabha elections.

However, his offer to resign was unanimously rejected by the CWC with several top leaders rallying behind him to continue to lead the party.

Almost two months after that, not only did the 49-year-old leader make his resignation public, but also removed the tag of "Congress President" from the bio of his Twitter handle.

Many protests and scores of resignations have come to the fore to stop Rahul Gandhi from resigning. Chief Ministers of all Congress-ruled states had met with Gandhi in Delhi to advice him to reconsider his decision to resign but of no avail.

The Congress won 52 seats in the recent general elections, which is just eight more than its 2014 Lok Sabha results.