Nath who also holds the post of president of the state Congress has earlier offered to step down from the party post to focus on governance. 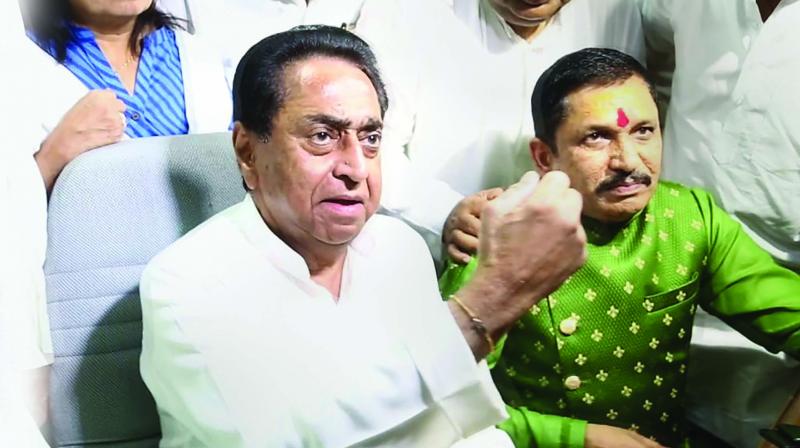 A file photo of Madhya Pradesh chief minister Kamal Nath speaking to media persons in the state Assembly in Bhopal.

The ‘trusted lieutenant’ of Nehru-Gandhi dynasty, Kamal Nath has demonstrated his political astuteness by not only seeing through a looming crisis in his ‘minority’ government, but also deftly ‘bulldozing’ the perception sought to be created that he was a mere puppet of a powerful leader, not the boss.

Bhopal: Madhya Pradesh chief minister Kamal Nath is perhaps one of the few politicians in the country who have mastered the art of sailing in two boats.

The “trusted lieutenant” of Nehru-Gandhi dynasty, Mr Nath has demonstrated his political astuteness by not only seeing through a looming crisis in his “minority” government, triggered by a rivalry between two veteran Congress leaders, Digvijay Singh and Jyotiraditya Scindia, over the post of president of Madhya Pradesh Congress unit, but deftly “bulldozing” the perception sought to be created that he was a mere puppet of a powerful leader, not the boss.

Mr Nath who also holds the post of president of the state Congress has earlier offered to step down from the party post to focus on governance.

The faction-ridden Congress in MP virtually landed in turmoil when Mr Scindia sulking since he lost the race for the office of chief minister to Mr Nath after the party returned to power in the state after 15 years in the November 2018 Assembly elections, last week issued a stern warning that he might explore alternative options if he was not handed rein of the party in the state.

This had apparently provoked his “arch rival” Mr Singh to stake his claim for the post, thus setting the stage for a battle of one-upmanship between them.

The scion of erstwhile Gwalior royal family Mr Scindia whose shocking defeat in the last Lok Sabha elections from Guna has put his career at crossroads was desperate to head the party to regain his lost ground and keep his flock together in the Congress.

He appeared completely “disillusioned” with the party leadership when he was appointed chairman of the screening committee for Maharashtra Assembly elections fearing that the assignment would keep him away from MP for a pretty long period robbing him of the precious time to restore lost ground in his LS constituency and retain influence in the party.

Mr Scindia, sources close to him said, was believed to be still under the impression that a machination by his rivals had landed him the assignment of overseeing Assembly elections in west Uttar Pradesh for the party in the last polls. This task, the sources added, kept him away from his LS constituency of Guna ahead of last parliamentary elections, which was a key reason for his defeat in the polls.

“Mr Scindia should be made MP Congress chief. His new assignment in Maharashtra is useless for him,” state women and child welfare minister Imarti Devi, his staunch loyalist, said.

His followers had also hit the streets demanding his appointment as PCC chief.

Giving a new twist to the infighting in the party, a letter written to a state minister by the former chief minister Mr Singh went viral sparking a furore in the Kamal Nath government.

All the ministers have been asked by Mr Singh through separate communications to report to him on the progress made in execution of his recommendations to them regarding transfers of officers in their departments.

This had not only infuriated the state ministers particularly owing allegiance to Mr Scindia but also the chief minister who was put in an awkward situation because of exposure that there was a parallel power centre.

“I have never faced charges of corruption in my half-a-century-long political career. The previous BJP government tried to dig out cases of corruption involving me during the 15-year-rule, but failed,” the former chief minister rued while reacting to Mr Singhar’s allegations.

“Mr Singhar has caused huge damage to Mr Singh’s political career by painting him as a blackmailer in the twilight of the latter’s career. It is an irretrievable damage to Mr Singh,” one of the close aides of Mr Singh observed, requesting not be quoted.

Mr Scindia has also backed Mr Singhar saying that outside interference in the government should not be entertained, thus rapping on the knuckles of both Mr Singh and Mr Nath.

“There is no challenge to my position as the CM from anybody in the party. Besides, I am capable enough to run the government since I have rich experience on governance by being a member of the Union cabinet several times,” Mr Nath retorted.

Sources in the party disclosed to this newspaper that the party high command was mulling to defer the plan to appoint a new PCC chief for MP and retain Mr Nath in the party post till a consensus candidate for it was found.

Mr Nath has thus not only re-established his supremacy in his government by “nipping in the bud” the parallel power centre, but also retained the post of PCC president.

This is like “Having the cake and eating it too”, a Congress leader remarked.