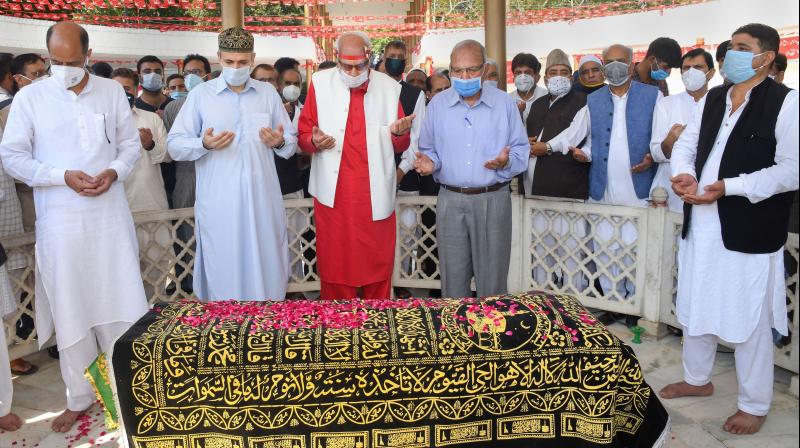 NC president Faroow Abdullah along with son and former J&K chief minister Omar Abdullah and other members, offer prayers at the grave of his father and party founder, Sheikh Mohammad Abdullah on his 38th death anniversary in Srinagar. — PTI photo

A day after Bharatiya Janata Party (BJP)’s national general secretary, Ram Madhav, accused Farooq Abdullah and Jammu and Kashmir’s other regional mainstream leaders of “trying to inject a dangerous Islamist discourse into the state politics”, the latter on Tuesday hit back saying that it were the saffron party and its ideological parent Rashtriya Swayamsevak Sangh (RSS) which are paying communal politics and that the same will result into their extermination.

“If anybody is playing communal politics, it is the BJP and RSS. We never did it and they are playing it and this will drown them,” Abdullah said while speaking to reporters here after offering fateha prayers at the grave of his father and legendary Kashmiri leader Sheikh Muhammad Abdullah commemorating his 38th death anniversary.

He asserted that his National Conference (NC) party never played politics over religion.  “NC never played politics over religion. That is our history. What was the motto of Sher-e-Kashmir (Sheikh Abdullah)? It was ‘Sher-e-Kashmir ka kya irshad; Hindu, Muslim, Sikh Itehad (what is the command of Lion of Kashmir? The unity among Hindus, Muslims and Sikhs)”, he said. He added that the reason behind the Sheikh’s becoming instrumental in changing the name of J&K Muslim Conference to National Conference way back in 1938 was because he knew people from all faiths were part of the struggle against the autocratic rule in the princely state.

Madhav had in an article appearing in ‘Greater Kashmir’ newspaper alleged that the NC leadership and other signatories of ‘Gupkar Declaration’ were “trying to take the people of Kashmir for a ride to chase a chimera”.

On August 4, 2019, a day before J&K was stripped of its special status and split up into two Union Territories, the leaders of the state’s regional parties including NC and People’s Democratic Party (PDP) and their allies in Congress and CPIM had met at Abdullah’s residence along Srinagar’s Gupkar Road and signed a joined statement named as ‘Gupkar Declaration’ through which they vowed to protect the special status, identity and autonomy of J&K and fight tool and nail attempts to split it up.

Last month, the leaders of NC, PDP, Peoples Conference, Awami National Conference, CPIM and Congress issued a joint statement here saying that they are  “wholly bound” by the “Gupkar Declaration” and “will unwaveringly adhere to it.”

But Mr. Madhav ruled out such possibility and said the clock cannot be turned back. Referring to the talks that were held between the then Prime Minister, Indira Gandhi, and Sheikh Abdullah through their emissaries before the latter’s return to power in 1975, the BJP general secretary wrote, “When Sheikh insisted on rolling back certain changes in the Article 370, Indira Gandhi bluntly told him that ‘the clock can’t be turned back’. The Sheikh’s son and grandson also know that the ‘clock won’t be turned back’ now by Prime Minister Modi either. Yet they are trying to take the people of Kashmir for a ride to chase a chimera”.

He added, “While the Sheikh had used plebiscite and secession as the chimera for his political ends, his scions are using Islam to deceive the Valley youth. The Plebiscite Front merged into NC, and Sheikh Abdullah became the Chief Minister.  But the separatist fire it ignited played havoc in the 1980s and 90s. The Gupkar leaders are resorting to that dangerous game once again, this time in the name of Islam”.