Abdullah urged India to play a greater role in the ongoing intra-Afghan talks, adding that India can play a vital role in establishing peace 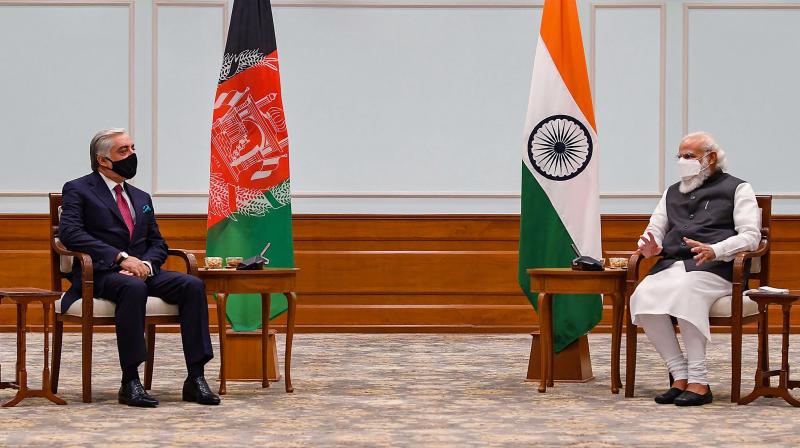 Prime Minister Narendra Modi with Head of Afghan peace council Abdullah Abdullah during the latter's five day visit to India as part of the efforts to build a regional consensus and support for the Afghan peace process. (PTI)

New Delhi: Dr. Abdullah Abdullah, Afghanistan’s  Chairman of its High Council for National Reconciliation - who is currently on a visit to India - met Prime Minister Narendra Modi on Thursday and briefed him on the ongoing talks in Doha that are going on with the Taliban and the Afghan peace process. PM Modi reaffirmed India’s long term commitment to further deepening ties between the two nations, “reiterated India's commitment towards sustainable peace and prosperity in Afghanistan and welcomed efforts towards a comprehensive and permanent ceasefire in Afghanistan”, the MEA said in a statement.

Meanwhile, at a “special address” on “The Future of Afghanistan”  at defence think tank “Manohar Parrikar Institute for Defence Studies and Analyses (IDSA)” in the Capital, Dr. Abdullah Abdullah urged India to play a greater role in the ongoing intra-Afghan talks, adding that India can play a vital role in establishing lasting peace in Afghanistan and the region, the IDSA said in a statement on the event. The Afghan leader reportedly described India as an important “strategic partner” of Afghanistan.

Talking about the engagement between the Afghan government and Taliban, Dr. Abdullah expressed his commitment towards a peaceful settlement, stating that both sides need to get to a stage where they can reach an amicable solution through peaceful means and create a system that works for all sections of the society, the IDSA statement mentioned.

Abdullah, while speaking about the future of his war-torn nation, said that the people of Afghanistan, after years of ravaging war, can now see some light at the end of the tunnel. He expressed hope that they will come together to build a peaceful country, which is friends with the neighbourhood and beyond, and is able to contribute to peace and security in the region,” the IDSA statement further mentioned.

On the meeting between the Afghan leader and PM Modi, the MEA said, “The two leaders discussed issues of bilateral and regional interest. Dr. Abdullah Abdullah briefed the Prime Minister on the Afghan peace process and the ongoing talks in Doha. Bilateral issues, including India's development cooperation with Afghanistan, were discussed. Dr Abdullah Abdullah appreciated Indian’s developmental commitment of US$ 3 billion, projects under which are benefiting Afghans across all of its 34 provinces.”