NDA constituents LJP, RLSP made clear they want to contest on same number of seats in next general election as in 2014. 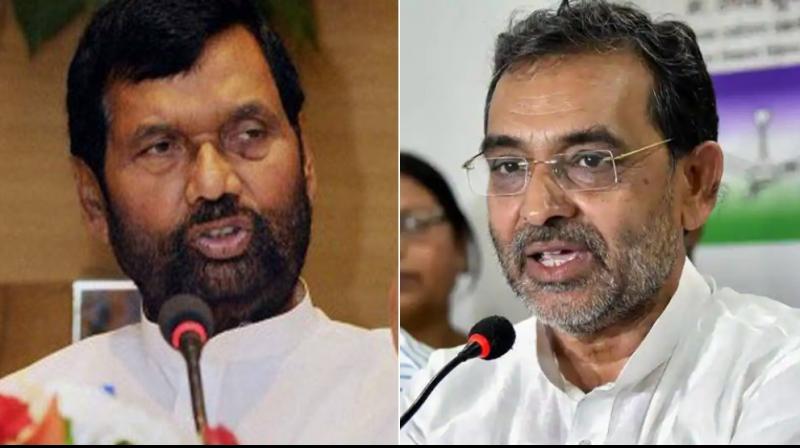 Patna: NDA constituents LJP and RLSP made it clear on Thursday they want to contest on the same number of seats in the next Lok Sabha election as in 2014.

A speculation had been rife that the BJP and the JD(U) could field their candidates on 34 out of the total 40 seats in Bihar, leaving the rest for the Lok Janshakti Party and the Rashtriya Lok Samata Party.

The BJP had won 22 seats in Bihar in the 2014 election, while Union minister Ram Vilas Paswan's LJP had contested on seven and won six. His colleague Upendra Kushwaha's RLSP had contested and won three seats.

LJP's Bihar unit chief Pashupati Paras, a state minister, dismissed as "kite-flying" the rumours that his party and the RLSP are likely to make sacrifices in the wake of BJP president Amit Shah and JD(U) supremo and Bihar Chief Minister Nitish Kumar agreeing to contest an equal number of seats in the state in the next Lok Sabha election.

"No seat-sharing talks will be complete until national presidents of all the four NDA alliance partners — BJP, JD(U), LJP and RLSP — sit together. That is yet to happen. All that is appearing in the media is hawa hawai (kite flying)", Paras, younger brother of Paswan, said.

In reply to a query, he said, "Obviously we would like to contest from at least seven seats. We had won six of the seven from which we had contested last time and lost one by a slender margin of 7,000 votes. Our graph has not gone down since the last Lok Sabha poll and there is no reason why we should not get our due share."

Asked about the agreement Shah and Kumar reached, he said it indicates "nothing".

"The 50-50 formula could mean anything. It could even imply that the BJP and the JD(U) would be fighting only 10 each, leaving the remaining 20 for other allies," he added.

The RLSP insisted that it would not accept a share of less than three seats. Its national general secretary and spokesman Madhaw Anand told news agency PTI, "There is no question of our agreeing to less than three seats. In fact, Kushwaha has conveyed the same to the BJP national secretary general in-charge of Bihar Bhupendra Yadav in person and to Shah over telephone".

Kushwaha had met RJD leader Tejashwi Yadav in a Bihar town minutes after Shah and Kumar announced in Delhi that they have reached a seat-sharing arrangement, fuelling speculation of a political realignment in the state.

Kushwaha, who shares an uneasy relationship with Kumar, has maintained that he is firmly with the NDA even as Tejashwi Yadav said there was a standing invitation to RLSP to join the opposition grand alliance.

Relations between Kushwaha and Kumar soured further recently after a remark by the chief minister that speaking about the dispute over seat-sharing with the RLSP was tantamount to lowering the standard of discourse.

Kushwaha has taken affront to the remark, claiming that Kumar, who is his erstwhile mentor, had in effect called him a lowly person and had taunted him for having joined hands with the BJP again after having taken umbrage over Prime Minister Narendra Modi's caustic remark about his political DNA during the 2015 assembly election.