Electricity bills for farmers will be halved, bills for Covid-affected periods will be waived and farmers who lost crops will get Rs.3000 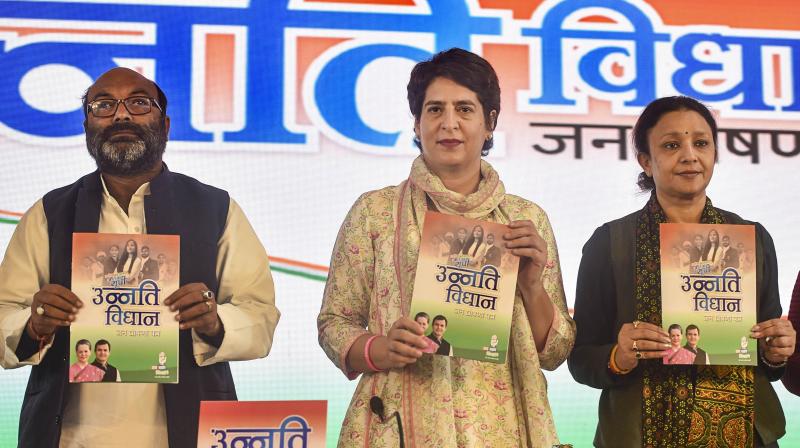 New Delhi: On the eve of the first phase of Uttar Pradesh Assembly elections, the Congress released its third manifesto for the state in which it promised to waive all farm loans within 10 days of forming the government.

Releasing the manifesto, general secretary incharge of the state Priyanka Gandhi said, "We have released three manifestos -- for women, for youth, and today the general one. Everything is based on suggestions from the public. We talked to one lakh people... including common people, labourers, farmers and people of all classes. This is a public manifesto."

She also said, "Jobs and inflation are the biggest issues. Like Chhattisgarh, farmers' loans will be waived off as soon as our government is formed," she said, adding, "Paddy and wheat will be purchased at ₹ 2,500 per quintal and sugarcane at ₹400 per quintal."

The other features of the manifesto are: Electricity bills for farmers will be halved, bills for Covid-affected periods will be waived and farmers who lost crops will get ₹3,000 as compensation.

The Congress has made unemployment, price rise and youth issues its poll plank in the upcoming Uttar Pradesh Assembly elections. The manifesto also promised that 20 lakh government jobs will be made available. Ms Gandhi said, "A huge backlog of 12 lakh jobs will be filled in the public sector, including police, healthcare and education. Apart from this, eight lakh more jobs will be given."

Other promises of the Congress manifesto include Godhan Nyay Yojana, ₹5,000 salary to school cooks, nearby posting for women cops, ₹50 lakh compensation to Covid warriors, regularisation of adhoc teachers and shiksha mitras based on experience and rules, free treatment for up to ₹10 lakh.

The Congress is trying hard to make an impact in the Uttar Pradesh Assembly elections. The party is fighting in almost all the constituencies in the state. In the first phase scheduled to be held on Thursday the party had to face several desertions in the last couple of months that has impacted its chances. The notables include Pankaj Malik, Harinder Malik and Saharanpur leader Imran Masood. However, former leader of the Congress legislature party Pradip Mathur who is contesting from Mathura is a known name in the region.