Assembly elections in the state are scheduled by the year end 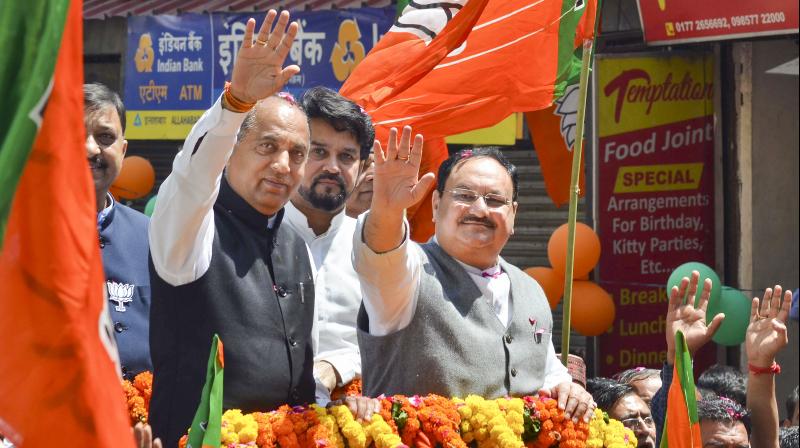 New Delhi: With a road show in his home state the BJP national president J.P. Nadda kickstarted the party's campaign for the upcoming assembly polls in Himachal Pradesh. Citing the BJP's victory in four of the five states in the just concluded assembly polls, Mr. Nadda sounded confident that the Himachal Pradesh voters will again support the incumbent government. The state chief minister Jairam Thakur and Union minister Anurag Thakur also participated in the road show.

Assembly elections in the state are scheduled by the year end. Seeking a reelection, the ruling party is going into the campaign with 'Mission Repeat' slogan in the hill state. While the BJP leadership is yet to officially announce whether or not the party will go to polls under CM Jairam Thakur's leadership, speculation is rife in the party's state unit that Mr Thakur will continue at the top post if BJP retains power.

Opposition Congress is battling factionalism and infighting. After the demise of Congress stalwart and former CM Virbhadra Singh many senior Congress leaders are lobbying hard to be projected as the CM face of their party.

In his home state for three days, Mr Nadda will also review preparations for the upcoming Shimla Municipal Corporation polls. The BJP had won the SMC for the first time after more than three decades in 2017.

Addressing a public meeting after the road show in Shimla, Mr Nadda credited Prime Minister Narendra Modi with changing the ‘culture of politics’ by being proactive in implementing various social service initiatives.

Mr Nadda claimed that the BJP governments have always tried to give to the hill state, while the previous Congress governments always kept ‘snatching’ from the state. "When Mr Modi became the PRIME MINISTER in 2014, he restored the state’s status, paving way for only 10 per cent contribution from the state and 90 per cent from the Centre for various development works,” he asserted.

Ahead of his tour, three senior office bearers of AAP's state unit, including its state unit chief switched camps and joined the BJP.