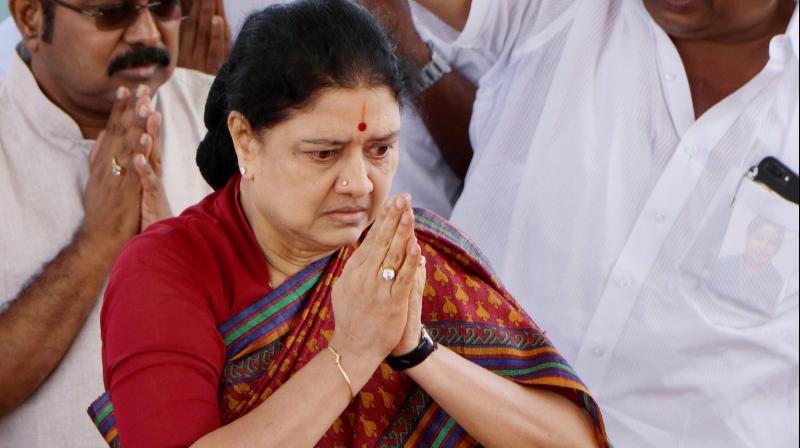 Dhivakaran, who has fallen out of favour with Sasikala following his public spat with their nephew Dhinakaran, also introduced his party flag with red and black stripes, with an added green star in the centre. (Photo: File/PTI)

Mannargudi: The estranged brother of deposed AIADMK leader VK Sasikala, V Dhivakaran, on Sunday launched his political party in Tamil Nadu, the second such outfit from the extended family.

Earlier, Sasikala’s nephew TTV Dhinakaran, legislator from RK Nagar in Chennai, had floated his Amma Makkal Munnetra Kazhagam (AMMK) after being sidelined from the ruling AIADMK by a section of the ministers.

Dhivakaran, who has fallen out of favour with Sasikala following his public spat with their nephew Dhinakaran, also introduced his party flag with red and black stripes, with an added green star in the centre.

Incidentally, green is considered a favourite colour of the late chief minister J Jayalalithaa, who headed the All India Anna Dravida Munnetra Kazhagam (AIADMK) at the time of her demise in December 2016.

Dhivakaran said he would be the ADK’s party’s general secretary.

Sasikala, serving a prison term in Bengaluru in connection with the Rs 66.6 crore disproportionate assets case, had last month served a legal notice on Dhivakaran, asking him to desist from taking her name in his public utterances.

She had then charged her sibling with speaking in support of AIADMK leaders, chief minister K Palaniswami and his deputy O Panneerselvam, who have fallen out with her.

She had issued the notice to Dhivakaran in the wake of his tussle with Dhinakaran coming to the fore.

Dhivakaran, however, dubbed the notice as another instance of ‘blackmail politics” by his nephew Dhinakaran and said he would henceforth not address Sasikala as his sister.

He had then said as per the notice she had become his “former sister.”