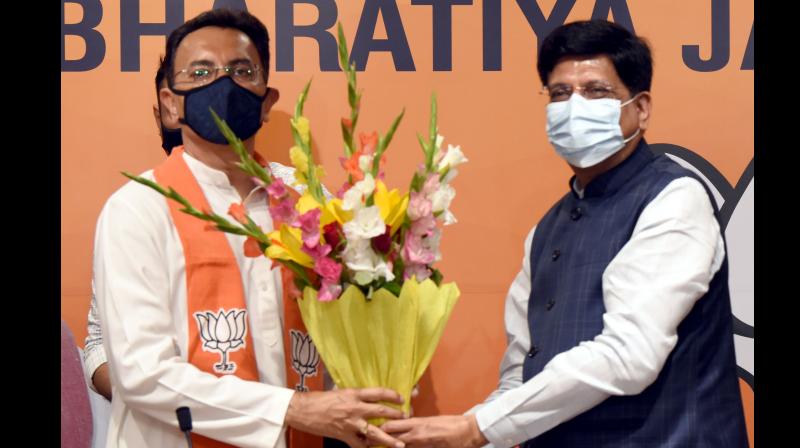 New Delhi: Jitin Prasada, a former Union minister and prominent member of the Congress’ young brigade that is headed by Rahul Gandhi on Wednesday joined the BJP ahead of the crucial Assembly polls in Uttar Pradesh. Calling the shift a “naya adhyay (new chapter)” in his political journey, Mr Prasada said he decided to join the BJP after much consideration as he was unable to serve the interests of his people and the society and that the BJP is the only "institutionally national party."

Mr Prasada, one of the signatories to the letter written by the "G-23" to the Congress’ interim president Sonia Gandhi, demanding major course correction within the organisation, is considered an important Brahmin face, though not a pan-UP Brahmin leader, in Uttar Pradesh where the Brahmin vote-bank is crucial for the BJP that keeps trying to create a balance while wooing the Brahmin and Thakur votebank.

Brahmins make up about 13 per cent of UP's voters and are an influential chunk who have  steadily gravitated from the Congress towards the BJP over the years. Mr Prasada’s entry into the BJP is seen as a balancing act at a time when feedback from the ground reaching the BJP leadership is suggesting that Brahmins are feeling neglected. His entry is meant to help the BJP reset the optics as the Yogi Adityanath government is perceived by a section of UP's Brahmins as being pro-Thakur (the chief minister's caste).

Mr Prasada is the son of late Congress leader Jitendra Prasada who was considered close to late Rajiv Gandhi and had unsuccessfully contested against Mrs Gandhi for the party president’s post.

“If there is any political party that works in an institutional way… if there is truly any national party, it is the BJP… PM Narendra Modi is leading the country strongly and is the most capable person to confront the challenges facing the nation… I want to do my bit for Sabka Saath Sabka Vishwas and Ek Bharat Sreshtha Bharat (Modi government’s slogans),” said Mr Prasada after joining the BJP in the presence of Union minister Piyush Goyal and BJP media incharge Anil Baluni.

Mr Prasada is the second leader after Jyotiraditya Scindia, who was also considered close to Rahul Gandhi, to join the saffron fold. The Congress is abuzz with renewed speculation that Sachin Pilot could also switch camp amid ongoing rumours that Rajasthan chief minister Ashok Gehlot could face fresh challenge from the Pilot camp after last year’s political crisis.

In political circles speculation had been rife since early 2019 that Mr Prasada could switch camp as he was feeling sidelined.

Since 2014, Mr Prasada has lost all the elections he contested. He lost last two Lok Sabha polls – 2014 and 2019 – from Dhaurahra Lok Sabha seat in Lakhimpur Kheri and the 2017 Assembly polls and was said to be miffed after the Congress leadership decided to appoint Ajay Kumar Lallu as the UPCC chief, a post Mr Prasada was said to be eyeing.

A former Union minister, Mr Prasada was member of the Congress Working Committee and the Congress’ election in-charge for the recently concluded Assembly polls in West Bengal where the party failed to win even a single seat.

In an obvious reference to the development, Congress leader Milind Deora tweeted, "I believe in @INCIndia as a party that can and must reclaim its position as India's big tent party. We still have a strong bench that if empowered and optimally utilised, can deliver." While Mr Pilot said, “It's very, very sad that Jitin Prasada has quit the Congress.” There has also been talk of Mr Deora leaving the party.

During the 2019 Lok Sabha elections, Mr Prasada was on the verge of switching sides but was persuaded by the then Congress incharge, Jyotiraditya Scindhia, who is currently in the BJP.

Once considered an integral part of team Rahul Gandhi, Mr Prasada has left the Congress when Mr Gandhi is expected to return to the helm following the party’s organisational elections.