Raut interviews Pawar amidst growing tension between Sena and NCP 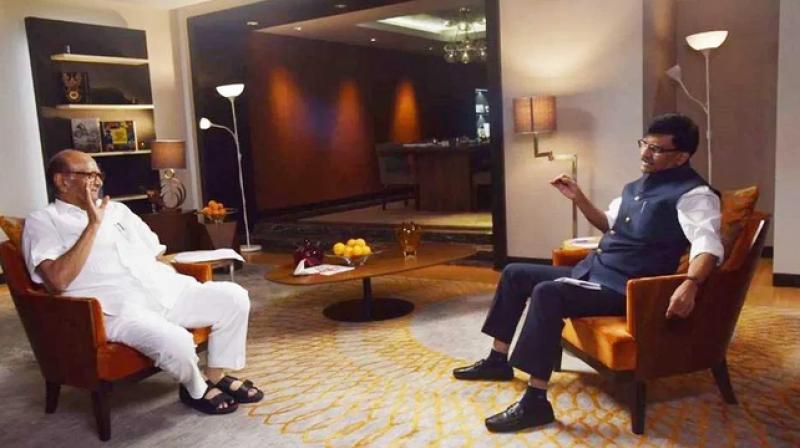 Mumbai: In Maharashtra, the interview of NCP chief Sharad Pawar taken by senior Shiv Sena leader Sanjay Raut has evoked tremendous interest in the corridors of state politics. The interview will create a stir in national politics, claimed the Sena leader.

Named as ‘Ek Sharad, Sagle Garad’ (Only one Sharad is enough to beat all), the marathon interview has been done in ‘Saamana’ style, Mr Raut has said. Saamana is the mouthpiece of Shiv Sena, which is aggressively used to target the opposition.

The interview is also seen as an effort to show the bonhomie between the Sena and the NCP after reports of rising differences in the two parties had surfaced last week.

In the interview, Mr Pawar has defended his decision to support the Shiv Sena to form the MVA government in Maharashtra saying I never thought Sena founder Balasaheb Thackeray’s ideology and working style was similar to that of BJP. “Though there are three parties with different ideologies in the MVA government, they are firmly behind Chief Minister Uddhav Thackeray,” he has said.

Mr Pawar played a major role in the formation of MVA government in Maharashtra. It is also said the NCP chief is running the government from behind the curtains with the help of a remote control, though he has denied it several times. In the interview, Mr Raut has directly asked the veteran leader, “Are you the remote control of Thackeray Sarkar or the headmaster?” The other question says, “Why is there a question in people’s mind that the change in Maharashtra politics happened due to an accident?”

This is perhaps the first time Mr Raut has interviewed any other party leader apart from Shiv Sena chiefs in Saamana. The interview will be released in three parts on July 11, 12 and 13 and will be available on the Shiv Sena’s mouthpiece ‘Saamana’.

However, BJP leader Devendra Fadnavis, the opposition leader in the Vidhan Sabha, has hit out at the interview saying ‘Saamana’ was being used to safeguard the government. “Saamana earlier belonged only to Shiv Sena, but now it unfortunately has become the mouthpiece of all three parties in the government,” he said.