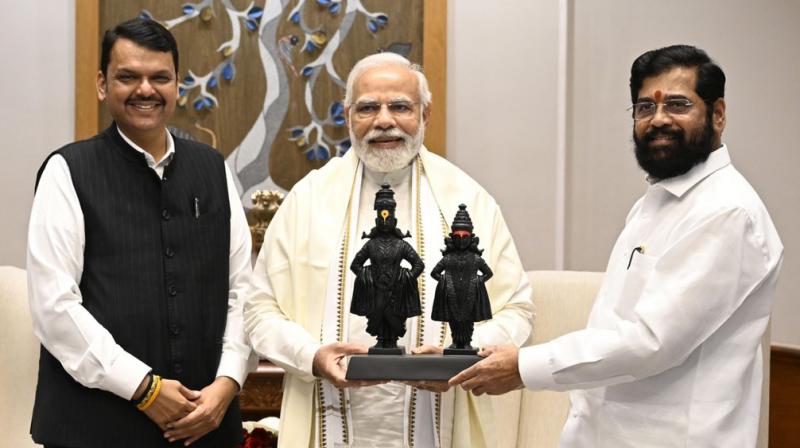 Earlier in the week, the NCP chief Sharad Pawar had predicted that the Shinde-led government may fall in the next six months.

The Maharashtra chief minister and his deputy are on tour in New Delhi since Friday. Both of them also met the Prime Minister at the latter's residence in New Delhi. In their first meeting after the new government assumed office in the state, both leaders sought his "blessings and guidance" for the development of Maharashtra.

Earlier, addressing a press conference in New Delhi, Mr Shinde said he would try and understand the Prime Minister's vision for the development of the state and strive to take Maharashtra to newer heights.

Mr Shinde said several projects such as the Samruddhi Expressway connecting Mumbai and Nagpur, metro rail in cities, and digging farm ponds to boost irrigation, which were initiated by Mr Fadnavis but had run into delays under the Thackeray-led Maharashtra Vikas Aghadi government, will be put on fast-track.

On Shiv Sena chief Uddhav Thackeray’s demand for a mid-term poll in Maharashtra, Mr Shinde said that the question does not arise as in democracy, the number matters. "We have the support of 164 MLAs. We have formed a strong government in Maharashtra as per the constitution. It will complete the full term," he said.

On the dispute over who gets to use the party symbol, Mr Shinde said, "We are Shiv Sena and haven't done anything illegal. We have been recognised as the Legislative party."

Mr Thackeray on Friday said that nobody can take away the bow and arrow, the symbol of the Shiv Sena and it will remain with him.

Mr Shinde reiterated that the rebel MLAs had made all the efforts to resolve the issues with Mr Thackeray. "The existence of our MLAs came under threat under the MVA government. Only the natural alliance of the BJP and Shiv Sena can take Maharashtra ahead. We tried to communicate this issue (with Uddhav Thackeray) but did not succeed. Therefore, we took this move (joining hands with the BJP)," he said.

Mr Shinde and Mr Fadnavis left for Pune on Saturday evening en route to Pandharpur, where the chief minister will worship Lord Vitthal on the occasion of Ashadhi Ekadashi on Sunday.

Meanwhile, the rebellion in Shiv Sena continued to grow. The Thackeray faction announced that they have removed former Navi Mumbai civic chief Vijay Nahata and former Opposition leader in the municipal corporation Vijay Chougule from the party after they joined the Shinde camp.

Shiv Sena mouthpiece Saamna on Saturday declared that the duo had indulged in anti-party activities and hence were removed from the party.

The ongoing rebellion has already dented the Thackeray faction, as 66 out of 67 corporators from Thane have joined Mr Shinde while several MPs are also backing him.