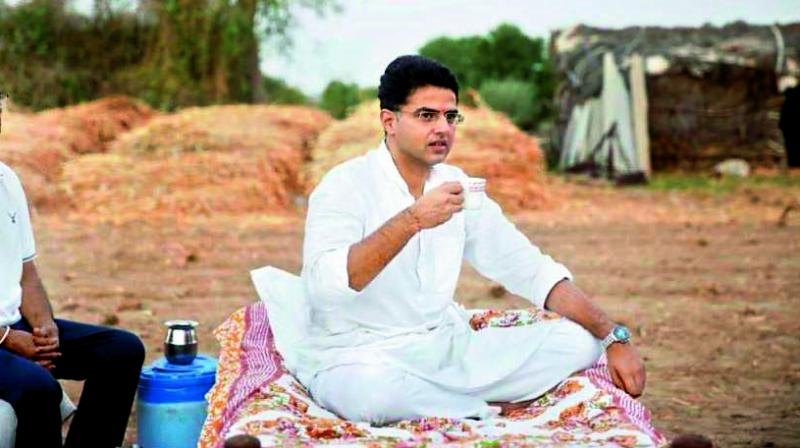 Sachin Pilot, now about to retrace his steps back into the Congress parivar. (File photo)

New Delhi: At long last it emerged on Modnay that Sachin Pilot and Rahul Gandhi met up to rescue the Congress' fat from the fire in Rajastham

The news agency PTI reported on Monday that rebel Congress leader Sachin Pilot met Rahul Gandhi and his sister Priyanka Gandhi Vadra and options were discussed to save the Ashok Gehlot-led Congress government should it come to a trust vote in the Rajasthan Assembly when it convenes on August 14.

Also, it would have to be face-saver for Sachin Pilot whose rebellion against Ashok Gehlot came to nothing and he now faces the prospect of his flock of 18 dwindling.

Sources who leaked the happening of the meeting were keen to signal 'something positive' was going to happen. "Top Congress sources" told PTI that the meeting took place a little after noon at Rahul Gandhi's residence and that a "positive outcome" was expected.

Sources also confirmed to PTI that Pilot has been in touch with the top Congress leadership and a formula for his return was being worked out.

According to sources close to Pilot, the meeting lasted for about two hours and the Pilot camp was assured that all issues raised by them would be resolved.

Party sources said Pilot has been in touch with the top Congress leadership and a formula for his return was being worked out.

Among the various options discussed was the possibility of favourable voting by Pilot and MLAs loyal to him in case of a trust vote during the upcoming session.

Pilot and 18 other MLAs rebelled against the Ashok Gehlot-led Congress government in Rajasthan, leading to Pilot's sacking as deputy chief minister and state party chief.

Party sources add some of the rebel MLAs have also been in touch with the Congress leadership in the last few days.

Sources also claimed that one of the MLAs was back to the Congress fold after being in touch with the party leaders. Other MLAs are likely to meet top party leadership soon and discuss their issues, they added.

The Congress had a total of 107 MLAs in the 200-member Rajasthan Assembly. This includes 6 MLAs who were previously with the BSP.

Pilot and other rebel MLAs would face disqualification in case they defied the Congress whip on the floor of the house.

With Ashok Gehlot firmly holding on to the remaining MLAs, top leadership are positive of resolving the rebellion raised against the state chief minister.