China, a permanent member of the UNSC, has maritime disputes with Japan and some South-east Asian countries such as the Philippines 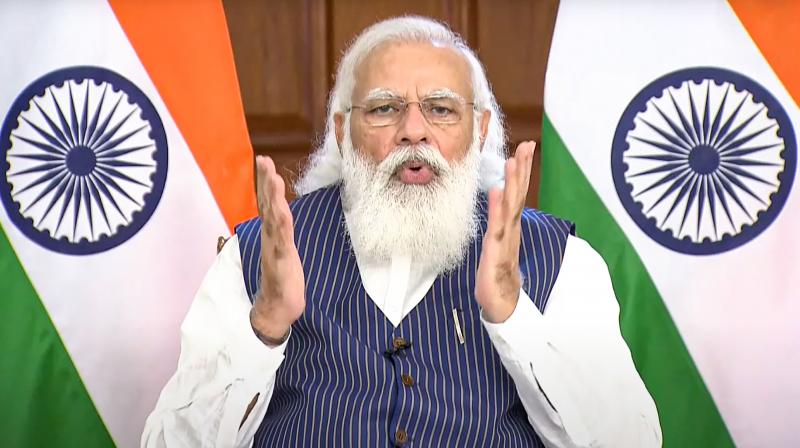 New Delhi: In strong but veiled messages aimed at China, Prime Minister Narendra Modi in his address at the UN Security Council (UNSC) on Monday said maritime disputes should be resolved peacefully, adding that maritime connectivity infrastructure projects should take into account the fiscal sustainability and absorption capacity of the host nation and that there should be global standards and norms devised for a “responsible” system. Also asserting that the rights of sea-farers carrying on trade should be respected, PM Modi mooted five principles for a global framework for maritime security cooperation and pointed out how India had peacefully and with "maturity" resolved its maritime dispute with Bangladesh.

PM Modi was chairing and addressing the virtual high-level open debate on “Enhancing Maritime Security: A Case for International Cooperation” at the UNSC on Monday evening, in what was a first by an Indian Prime Minister. India, currently a non-permanent member of the UNSC, has assumed the presidency of the UNSC for this month.

It may be noted that China, a permanent member of the UNSC, has maritime disputes with Japan and some South-east Asian countries such as the Philippines that has resulted in tensions in the region. China has also undertaken ambitious maritime connectivity infrastructure projects with countries like Sri Lanka as part of the Chinese-led Belt and Road Initiative (BRI) which has attracted controversy due to factors such as debt-burden of the host countries.

PM Modi also spoke about the need to unitedly face maritime threats from non-state actors, seen as an indication towards the 26/11 attacks on Mumbai in 2008 when Pakistani terrorists used the sea route to attack the city. Asserting that maritime routes were being misused for pricay and terrorism, he spoke of India’s role as a net security provider in the Indian Ocean region.

“Maritime disputes should be resolved peacefully and in accordance with international law. This is essential for mutual trust and confidence. It is through this that global peace and stability can be assured. It is with this understanding and maturity that India resolved its maritime boundary (issue) with Bangladesh,” PM Modi said, in a veiled message to Beijing.

“We should remove barriers from maritime trade... Any disruption can cause challenges to the global economic system,” PM Modi said, and added that India believed in an inclusive ethos under the SAGAR (Security and Growth for All in the Region) vision. He said that based on this, India wanted to lay an inclusive foundation for maritime security in the region, adding that to ensure free maritime trade, everyone should respect the rights of sea-farers of each other’s countries. This too is being seen by observers as a veiled reference to the Chinese military posturing in the South China Sea.

“We should encourage responsible maritime connectivity. It is clear that infrastructure is needed for expanding maritime trade. However, the development of such infrastructure should take into account the fiscal sustainability and absorption capacity of nations. We have to devise global norms and standards for this,” PM Modi said in what is being seen as a thinly-veiled reference to the Chinese-led BRI.

The meeting was also attended by some of the heads of state and government of member states of the UNSC including Russian President Vladimir Putin. Indian government sources had earlier said this was the first time that maritime security would be discussed in a holistic manner as an exclusive agenda item in such a high-level open debate.