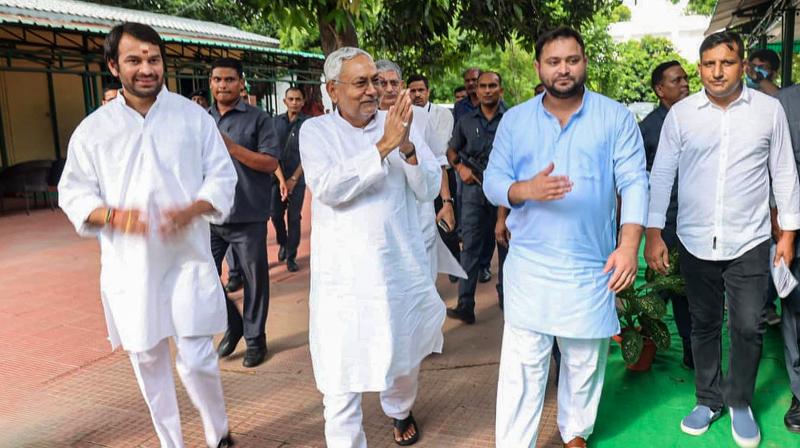 Patna: Bihar chief minister Nitish Kumar met state governor Phagu Chauhan and submitted his resignation shortly after snapping ties with the NDA on Tuesday. The decision to quit the coalition government was taken at a meeting with all JD(U) MPs and MLAs here Tuesday morning. Mr Kumar chaired the meeting at his official residence here.

“The MPs and MLAs of my party met today and decided to snap ties with the NDA government. I met the governor and resigned as chief minister of Bihar”, Mr Kumar said after submitting his resignation to the Bihar governor at Raj Bhavan.

After he submitted his resignation, Mr Kumar visited the residence of Rabri Devi in Patna, where Congress and Left party leaders had met earlier to discuss the formula to support the JD(U) in forming the “Mahagathbandhan” government.

Later, after holding a brief discussion with the alliance leaders, Mr Nitish Kumar met the governor for the second time on Tuesday and staked claim to forming a Mahagathbandhan government in Bihar. RJD chief Tejashwi Yadav accompanied him to the governor’s house and submitted a list of 164 MLAs.

“I have the support of seven political parties and 164 MLAs. The agenda of this government will be to work for the development of the state. There will be no compromise on corruption”, chief minister Nitish Kumar said after meeting the governor. He said he had submitted the letters of support and will wait for the governor to call him to form the next government.

The swearing-in of the new Nitish Kumar government is likely to take place at 4 pm on Wednesday at the Raj Bhavan. RJD chief Tejashwi Yadav is likely to be the deputy chief minister, and the new Assembly Speaker will be from the RJD.

Tejashwi Yadav said: “History tells that the BJP destroys the parties with whom it forms an alliance. We have seen this happening elsewhere as well.”

Mr Nitish Kumar said that he has submitted the letters of support and would wait for the governor to call him to form the next government.

When asked why he chose to end his ties with the BJP-NDA, Mr Kumar said: “A situation was being created to divide society, which I did not like. There are many other things which didn’t go well with my party leaders”.

What triggered conflict: JD(U) leaders said that there have been many issues which triggered a conflict with the BJP. They said Mr Kumar, at the meeting, said the BJP tried to weaken his government on many occasions. They said the party is convinced that it was the BJP and Chirag Paswan who was behind the JD(U)’s poor show in the 2020 Assembly elections. The JD(U) was reduced to the third position, with 45 seats, in the last Assembly elections.

Nitish Kumar was also upset when BJP dominated the Cabinet formation in 2020 and put two deputy chief ministers. He also sees the entire R.C.P. Singh episode as part of the BJP’s conspiracy to cause a split in the JD(U).

Party leaders said Mr Kumar felt on many occasions that there wasn’t enough support despite the “double-engine” government. He also found no support from the BJP when the Assembly Speaker raised questions about the law and order scenario. The situation got out of hand in March and resulted in a war of words between the Speaker and the chief minister on the floor of the House.

The Bihar Legislative Assembly comprises 243 seats, bringing the majority mark to 122 seats. The RJD has 79 MLAs, JD(U) 45, Congress 19, Left 16 and Jitan Ram Manjhi’s HAM four seats. The BJP, which is the second-largest party in Bihar, has 77 MLAs in the Assembly.

As politics heated up in Patna after the NDA government collapsed, the BJP appeared to be on the backfoot. It accused Nitish Kumar of “betraying the people of Bihar by switching partners”.

Senior BJP leader Ravi Shankar Prasad, who landed in Patna immediately after Mr Kumar resigned, said: “He (Nitish Kumar) ended his ties with the Mahagathbandhan on the issue of corruption, and now he has once again returned to their camp. This has been his habit to switch sides. Does he even remember what he used to say during elections? He has betrayed the people of Bihar and insulted the mandate by switching sides”.

In 2013, Nitish Kumar and his JD(U) split from the BJP after Narendra Modi was declared as the NDA’s PM face. Two years later, in 2015, he joined hands with his arch-rivals Lalu Prasad Yadav’s RJD and the Congress to form a Mahagathbandhan in Bihar. He fought the elections and returned as Bihar CM.

In 2017, Nitish broke ties with the Mahagathbandhan over corruption charges against then deputy CM Tejashwi Yadav, saying he had “zero tolerance for corruption”.