India   Politics  10 Sep 2018  Telangana may vote before polls in 4 other states
India, Politics

Telangana may vote before polls in 4 other states

An Election Commission team will visit Telangana on Tuesday to assess the situation for holding early elections. 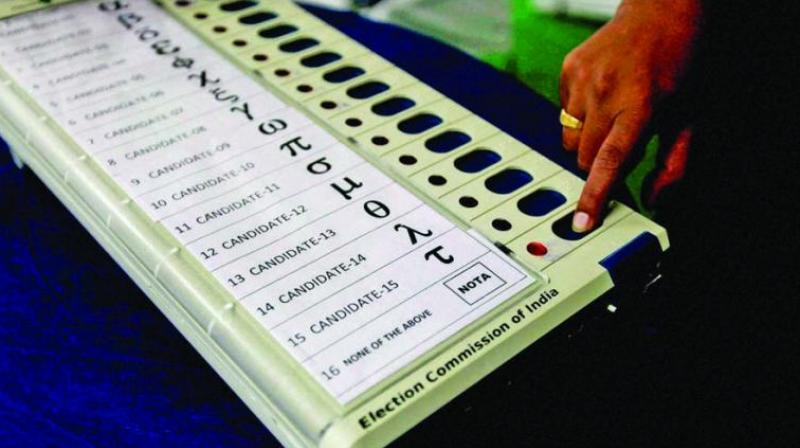 The terms of the Assemblies in Madhya Pradesh, Chhattisgarh, Rajasthan and Mizoram are due to end between December 15 and January 20, while the Telangana Assembly’s term ended on September 6.

Hyderabad: The Telangana Assembly elections are most likely to be held prior to the elections in four other states. An Election Commission team will visit Telangana on Tuesday to assess the situation for holding early elections.

State chief electoral officer Rajat Kumar is leaving for New Delhi on Monday, a day prior to the EC team’s visit to the state, and is learnt to have readied a report to be submitted to the EC stating that all arrangements are in place for polls in the last week of November.

The terms of the Assemblies in Madhya Pradesh, Chhattisgarh, Rajasthan and Mizoram are due to end between December 15 and January 20, while the Telangana Assembly’s term ended on September 6.

This is to ensure an adequate number of Electronic Voting Machines, voter-verified paper audit trails (VVPATs) and security forces are in place for the smooth conduct of elections in Telangana, that would be difficult if five state polls are clubbed together.

The EC on Saturday issued orders stopping revision of photo electoral rolls in Telagnana with the cutoff date of January 1, 2019 and to go ahead with the draft rolls of January 1, 2018, to pave the way for early elections in Telangana.

Speaking to the media on Sunday, Mr Rajat Kumar said: “The two-day tour of the EC team to Telangana to assess the arrangements for elections will begin on September 11. The team will meet representatives of all political parties and election officials on Day 1 and district collectors, SPs, chief secretary and DGP on Day 2.

“The team will gather all the details and submit a report to the Election Commission, which will take a call on the schedule for the Telangana Assembly polls.” He said the supply of EVMs and VVPATs to the state will begin from Monday and the training for polling staff will begin soon.

Official sources said the EC has been citing Supreme Court orders to give priority for holding elections in states where the term of Assemblies has ended and in this backdrop the EC wants to hold the Telangana Assembly elections first, before the other four states.