It was expected to commence operations in mid-April this year but was delayed due to permission to cut trees inside Parsa National Park. 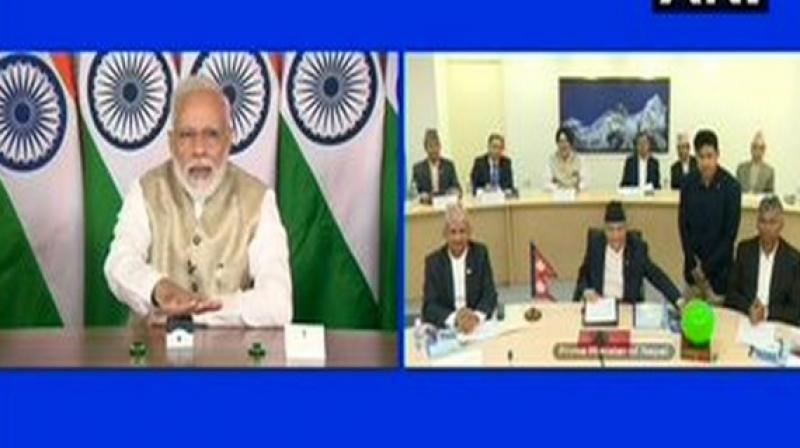 New Delhi: Prime Minister Narendra Modi and his Nepalese counterpart K P Sharma Oli on Tuesday jointly inaugurated the India-Nepal petroleum pipeline, the first ever cross-border pipeline inSouth Asia that seeks to enhance the energy security of the region and substantially cut down on transit costs.

The petroleum pipeline extends from Motihari in Bihar to Amlekhganj town in southern Nepal in the project in which India has invested Rs 3.5 billion to install the pipeline.

Expressing satisfaction over the completion of the pipeline, Modi, who inaugurated the project through videoconferencing, said that it was ready in half the time than expected.

"It is a matter of great satisfaction that the first cross-border petroleum pipeline of South Asia has been completed in record time. It was ready in half the time than expected," Modi said in a video conference during the petroleum pipeline along with his Nepali counterpart KP Sharma on the other side.

"The credit for this goes to your leadership, the support of the Government of Nepal and our joint efforts," he added.

The landmark project was first proposed in 1996. However, the project finally edged closer to reality during Modi's visit to Kathmandu in 2014.

It was expected to commence operations in mid-April this year but was delayed due to permission to cut trees inside Parsa National Park.

Modi and Oli had jointly laid the foundation stone for the project at the Hyderabad House in New Delhi during Oli's visit to India last year.

"This project will without any doubt enhance the interconnectedness and interdependence between our two countries. It is one of the best examples of connectivity in terms of trade and transit infrastructure of Nepal," Oli said on the occasion.

The Nepali Prime Minister also thanked the Indian government for the support and cooperation to bring into operation such an important project.

"Nepal-India cooperation is not limited to a few projects alone. Many more bilateral projects covering various areas of cooperation such as railways, inland waterways, roads, hydro-power generation and others are in the pipeline. Early completion of them with similar efforts I believe that the project will enormously benefit both of our countries," he stressed.

Oli also appreciated India's efforts to rebuild houses in the aftermath of the deadly earthquake that struck the Himalayan country in 2005 and left more than 8000 people dead.

"We also appreciate the works relating to the post-earthquake reconstruction of about 50,000 in Gorkha and Nuwakot districts of Nepal under India's assistance," he said.

"India extended its hand for cooperation as a neighbour and a close friend," Oli added.

Modi, on his part, noted that it was a result of the joint cooperation efforts between India and Nepal.

"I am happy that due to our joint cooperation houses have been built again in Gorkha and Nuwakot districts of Nepal," the prime minister said.