India   Politics  10 Oct 2017  What did 3 generations of Gandhis do for Amethi? Shah attacks Rahul
India, Politics

What did 3 generations of Gandhis do for Amethi? Shah attacks Rahul

Shah said that Amethi is known all over the world as a Nehru-Gandhi family bastion, but there has been no development. 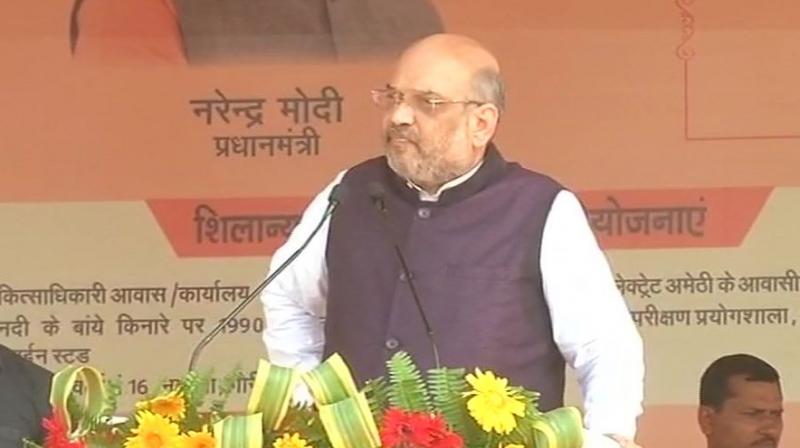 Amethi: Attacking Rahul Gandhi for asking Prime Minister Narendra Modi's report card for the NDA government’s work in Amethi in the past three years, BJP chief Amit Shah asked Congress vice-president what the three generations of Gandhis have done for the town.

"Rahul baba always asks us what Modiji has done for the nation," Amit Shah said in Amethi on Tuesday. Shah said Rahul cannot see development as he sports Italian spectacles.

“I would like to ask Congress' 'Shahzaada' Rahul Gandhi the same question. What have you done for the people of Amethi, who gave you nothing but their whole-hearted support and love? Have you done anything for those who look up to you?” Shah said.

Shah said that Amethi is known all over the world as a Nehru-Gandhi family bastion, but there has been no development. Whereas, the BJP has launched 106 welfare schemes for the benefit of all, especially the poor, since being voted to power in 2014.

Amethi, the stronghold of the Congress, has been Nehru-Gandhi family’s constituency since 1980.

"In the three years that we have been in power, Modi government has brought about 106 schemes. Maybe Rahul Gandhi does not even know how to count," he said. "By 2022, UP will be developed by Gujarat," he added.

"Rahul baba, you are wearing Italian glasses. You cannot see things from the Indian perspective," he said.

Shah and Union minister Smriti Irani are at Amethi in Uttar Pradesh for a mega rally. The rally will also be presided over by Chief Minister Yogi Adityanath.

Amit Shah’s visit was preceded by Rahul Gandhi, who was there in Amethi only three days back.

During the rally several announcement of schemes and projects will be made. Foundation stones for many projects will also be laid during Shah’s visit.

Irani, in an effort to save the Gomti river near Pipri village, will be attending the launch of an FM station.

Irani will also attend the inauguration of a tuberculosis unit at the district hospital and a primary health centre at Odrai Tilloi. She will be present at other public welfare programmes launched by the state and the Centre.

During the 2014 Lok Sabha election, Amethi stood witness to a high-pitched electoral tussle between Irani and Rahul. Though Irani lost the 2014 poll, she had successfully reduced Gandhi’s victory margin to 1.07 lakh from 3.70 lakh.