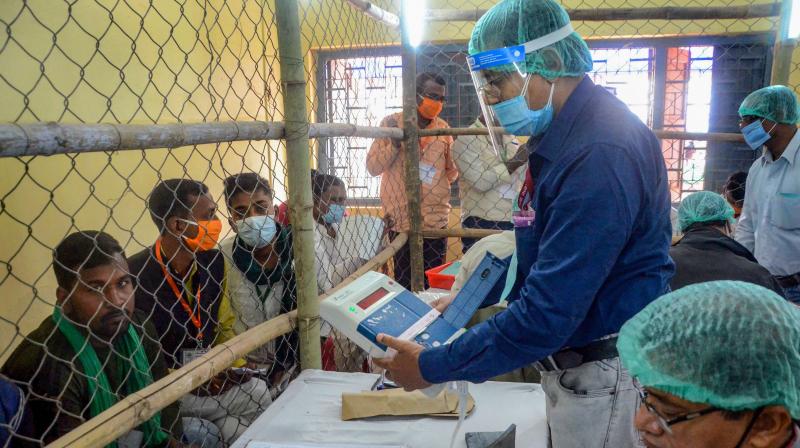 Bihar Assembly elections looked too close to call Tuesday night with the ruling NDA maintaining a slender edge over the RJD-led Grand Alliance, winning 12 seats and leading in 109 others.

The NDA's tally of 121 seats is just seven more than the Grand Alliance whose partners have won nine seats and are ahead in 105. RJD's co-traveller, the Congress, has won two seats and its nominees are leading in 18 others

In several seats, the margin between candidates of the two alliances range from less than 100 to less than 5,000 votes.

Meanwhile, the Rashtriya Janata Dal (RJD) has alleged JD(U) of "interfering" in 10 closely-fought seats and pressuring ECI officials to restrain Mahagathbandhan to 105-110 seats at any cost. The RJD and the Congress have knocked the doors of the Election Commission against alleged irregularities in the process.

In a major development in Left politics, the CPI-M has pocketed one and is leading in two. CPI-ML candidates are ahead of their rivals in 12 constituencies and CPI in three.

If the current trend continues, the NDA could end up tantalisingly close to the 122 mark required for a simple majority, but there could be many a slip between the cup and the lip with the opposition alliance rapidly closing the gap.

Not only has the RJD edged past the BJP in terms of numbers but also garnered more votes. While the saffron party has polled 19.39 per cent votes, the RJD clinched 23.43 per cent.

Hyderabad MP Asaduddin Owaisi's AIMIM is emerging as a surprise package, winning one seat and leading in four others. It had won a seat in a by-election in Bihar earlier, but appears to be making significant inroads in the Seemanchal region which has a large presence of Muslim voters.

Given his pathological aversion to the BJP, Owaisi could be more than willing to lend a helping hand to the Grand alliance if it falls short of a majority by a few seats.

AIMIM national spokesperson Asim Waqar said that a final decision on who AIMIM could back in case of a hung assembly will be taken by Owaisi, but ruled out supporting the BJP, asserting that his party's fight has always been against the saffron party.

The LJP, down in the dumps itself, appeared to have contributed its bit to the unimpressive showing of the JD(U), damaging its prospects in at least 30 seats, according to the latest trends.

Chirag Paswan's party, which walked out of the NDA in Bihar just ahead of the poll, is set to fare abysmally as it has neither won nor is leading in any seat despite polling 5.63 per cent of the 2.70 crore votes counted so far.

JD(U) spokesperson K C Tyagi said that a "sinister" campaign was run against Nitish Kumar as part of a "conspiracy". "Apne bhi shamil the aur begane bhi (Our own also harmed us along with the outsiders)," he said, without taking any names.

He, however, expressed confidence that Kumar will become the chief minister again, noting that top BJP leaders including Prime Minister Narendra Modi and Home Minister Amit Shah have made it clear that he will head the government if the ruling NDA retains power.

Bihar BJP president Sanjay Jaiswal voiced similar views in Patna when he said in Patna "the issue has been cleared by Prime Minister Narendra Modi and party chief J P Nadda much before the elections".

As the contest looks like going down to the wire, Abdul Bari Siddiqui, a former Bihar RJD chief, and party supremo Lalu Prasad's Man Friday Bhola Yadav lost from Keoti and Hayaghat seats in Darbhanga respectively.

Sources said Tejashwi Yadav has won from Raghopur defeating Satish Kumar of the BJP but an official confirmation is awaited. His elder brother Tej Pratap Yadav too has won in Hasanpur by 21,139 votes.

State Assembly speaker Vijay Kumar Chaudhary is leading from Sarairanjan in Samastipur district, while ministers Shravan Kumar (Nalanda) and Krishna Nandan Prasad Verma (Jehanabad) are also ahead of their rivals.

Lesi Singh of the JD(U) won the Dhamdaha seat in Purnia district. It was while campaigning for her that Nitish Kumar had declared it was going to be the last election for him, making an emotional appeal to electors to vote the NDA back to power.

Whether the voters have heeded his appeal only time will tell.

Counting of votes has been tardy because of various protocols in place in view of the COVID-19 pandemic. To ensure social distancing norms put in place due to the COVID-19 pandemic, the commission had increased the number of polling stations from nearly 65,000 in the 2015 Assembly polls to 1.06 lakh.

In a press conference, the Election Commission of India said that the election results will be out late at night as the number of counting centres have increased from 38 to 55 this time.

However, the EC added the pace of counting has not slowed down but the results will be "slightly delayed" due to the increase in EVMs. It also said that EVMs are robust and tamper-proof.