This comes after Gujjar leader Kirori Singh Bainsla said, ‘We will leave only after getting 5 per cent reservation.’ 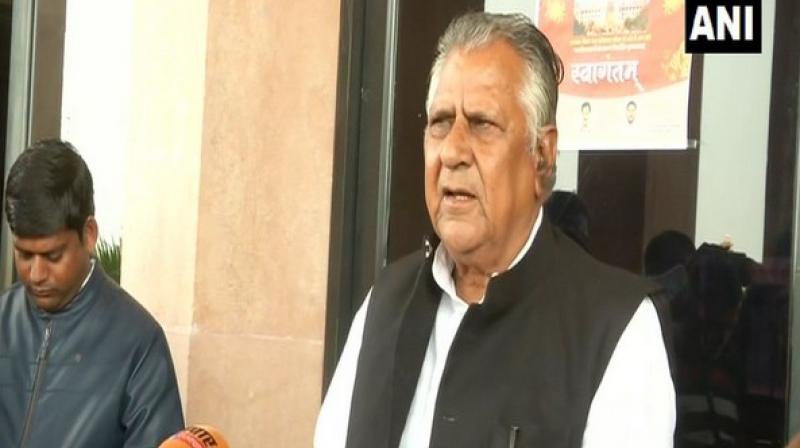 ‘I would like to appeal to Bainsla Ji to send team for dialogue, will discuss how their demands can be met within Constitutional limits,’ Rajasthan Minister Bhanwar Lal said. (Photo: ANI)

The protest launched by the Gujjar Community entered its fourth day today.

Lal stated, “Would like to appeal to Gujjar community that please do not resort to violence, protest peacefully. I would also like to appeal to Bainsla Ji to send his team for dialogue, and we will discuss as to how their demands can be met within limits of Constitution.”

Gujjar leader Kirori Singh Bainsla: We will leave only after getting 5% reservation. It’s my personal request to govt, don’t do anything which can provoke people of Rajasthan, people are waiting for my instructions. let’s sort it out in a peaceful manner. The earlier the better. pic.twitter.com/LWJnXxMq3H

On Sunday, the protesters turned violent as three police vehicles were torched in Dholpur district and around 10 shots were also fired.

According to police, unidentified miscreants fired around 10 shots in the air during the blockade on Agra-Morena highway. Three police vehicles including two jeeps and a bus were torched by the agitators, said the police, which had to use tear gas shells to disperse them.

In an appeal to Gujjar community, Chief Minister Ashok Gehlot has asked them not to sit on the rail tracks and has urged them to submit a memorandum to Prime Minister Narendra Modi. On Saturday, agitators erected tents on railway tracks Sawai Madhopur district.

Last year on October 26, the BJP government led by Chief Minister Vasundhara Raje had passed a Bill, which increased Other Backward Classes (OBCs) quota from 21 per cent to 26 per cent. In December 2018, the state government had also approved one per cent reservation for Gujjar and four other OBCs as per the Supreme Court-imposed 50 per cent quota ceiling.