Delhi breaks out in blue and white

Warned by Kejriwal not to burst crackers, AAP volunteers pop laddoos instead 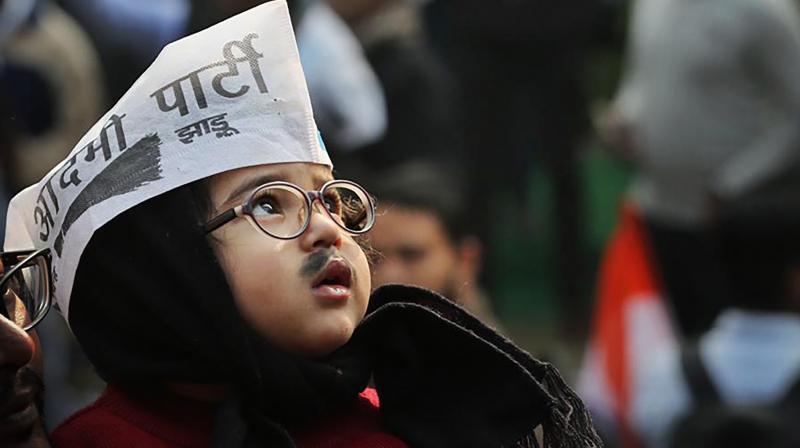 New Delhi: Tempered by Arvind Kejriwal's order not to burst crackers, Aam Aadmi party cadres burst out in blue and white to celebrate their party's resounding victory in the Delhi elections on Tuesday.

Carrying balloons, buntings and giant cutouts of their leader Kejriwal and grooving to their campaign song 'Lage Raho Kejriwal', hundreds of AAP workers went into celebratory mode as the trends promised the prospect of a repeat of the clean sweep in 2015.

As the party's tally went up, AAP supporters hugged each other and offered 'laddoos'. Several supporters draped themselves in the Tricolour and flashed victory signs as the giant screen showed the party's surge.

"Delhi bach gaya," said 21-year-old Ramesh Sharma, an engineer and a volunteer who campaigned for the party for three months.

"We have barely slept in the last few months. I can't tell you how happy we are. It has sent a very strong message that only development works, nothing else," he said.

A stage decorated with balloons and flowers was also set up on the roof of the party office from where Kejriwal is expected to address workers after the final results are announced.

Accompanied by his political strategist Prashant Kishor and senior party leaders Gopal Rai and Sanjay Singh, the chief minister was at the party office, following trends but did not come out.

According to Election Commission (EC) numbers available at 3.30 pm, the Aam Aadmi Party had won or was leading in 63 seats while the BJP was ahead in 11.

"We knew it. We have changed the politics of this country. Now it is Delhi, next it is India," said a jubilant Sanjeev Singh, a volunteer from Hari Nagar.

"We hope we get such a clear majority that a message goes out that doing Hindu-Muslim politics will not work any more," added another volunteer Fareen Khan.

The AAP headquarters were decorated with blue and white balloons and big cut-out of Kejriwal was put up.

"Hindustan jeeta hai (India has won). I want to thank the two crore people of Delhi for making the son of Delhi victorious," Singh said.

"People of Delhi have showed the way to the country that only development works will take it forward and not Hindu-Muslim politics. All kind of divisive politics has been rejected by the people of Delhi and we will win 70 out of 70 seats," said Sushil Gupta, AAP Rajya Sabha MP.