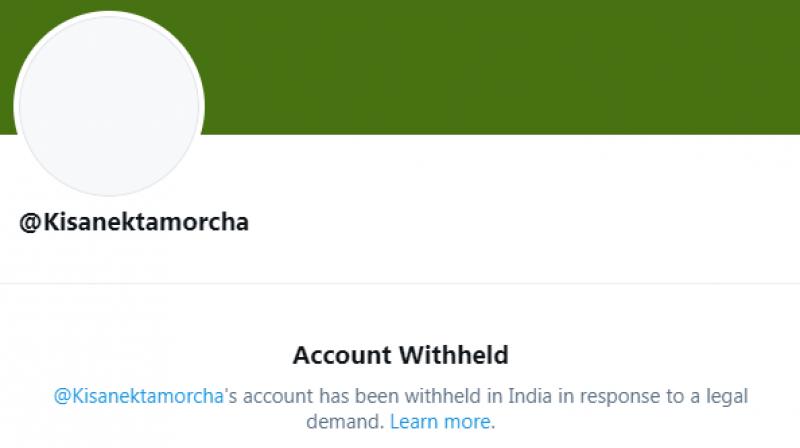 New Delhi: The government on Wednesday expressed "strong displeasure" over Twitter's delay in taking prompt action against accounts and hashtags spreading misinformation and provocative content around the farmers' stir, as the IT Ministry made it clear that the company must comply with the country's laws irrespective of the platform's own rules.

Twitter has suspended over 500 accounts, and blocked access to several others within India while refusing to block accounts of "news media entities, journalists, activists and politicians" citing the need to uphold freedom of expression.

During a virtual interaction between IT Secretary and senior officials of Twitter, the government told the microblogging platform that as a business entity operating in India, it must respect the laws and democratic institutions and take strong action against "well-coordinated" campaigns "designed to create disharmony and unrest" in the country.

Slamming the delay by the platform in complying with government orders on taking down provocative content around farmers' stir, the IT Secretary also expressed dissatisfaction over Twitter's "differential treatment" in case of the US Capitol Hill siege, where it had taken prompt action.

"Secretary reminded Twitter about the action taken by Twitter during the Capitol Hill episode in the USA and compared that with the disturbance in Red Fort in India and its aftermath. He expressed dissatisfaction over Twitter's differential treatment in the two incidents," the IT Ministry said in a statement.

The government questioned the manner in which Twitter "officially allows fake, unverified, anonymous and automated bot accounts to be operated on its platform" and said it raises doubts about its commitment to transparency and healthy conversation on the platform.

The "deep sense of disappointment" at seeing Twitter "side not with 'freedom of expression' but rather with those who seek to abuse such freedom and provoke disturbance to public order" was conveyed to the company, the statement added.

The Secretary also flagged the issue around a 'toolkit' that was shared on its platform amid the farmers' protest, and said the chain of events had made it evident that a strong social media campaign was planned in a foreign country around the agitation.

"Misuse of Twitter's platform for execution of such campaigns designed to create disharmony and unrest in India is unacceptable and Twitter must take strong action against such well-coordinated campaigns against India, through compliance with the applicable law of the land," the statement said.

Twitter representatives were reminded that while the government values freedom of speech and expression and takes criticism in its stride, such freedom is "not absolute" and subject to reasonable restrictions under the Constitution.

"Twitter, as a business entity working in India, must also respect the Indian laws and democratic institutions. Twitter is free to formulate its own rules and guidelines, like any other business entity does, but Indian laws which are enacted by the Parliament of India must be followed irrespective of Twitter's own rules and guidelines," the statement asserted.

He further stated that lawfully passed orders are binding on any business entity.

"They (orders) must be obeyed immediately. If they are executed days later, it becomes meaningless," the statement said, pointing out that it was disappointing how Twitter had "unwillingly, grudgingly and with great delay" complied with the substantial parts of the order.

The Secretary took up the issue of 'farmer genocide' hashtag with the executives and expressed strong displeasure on the way Twitter had acted after an emergency order was issued to remove the hashtag and content related to that.

"Spreading misinformation using an incendiary and baseless hashtag referring to 'farmer genocide' at a time when such irresponsible content can provoke and inflame the situation is neither journalistic freedom nor freedom of expression as envisaged under Article 19 of the Constitution of India," the statement said.

Despite the government drawing Twitter's attention to such content through a "lawful process", the platform allowed the content with this hashtag to continue, which was "extremely unfortunate", the statement said.

The statement noted that Twitter leadership affirmed their commitment towards following Indian laws and rules.

The executives expressed their continuing commitment towards building Twitter services in India and that they have also requested for better engagement between the Indian government and the company's global team.

Twitter did not respond to e-mailed queries on the meeting.