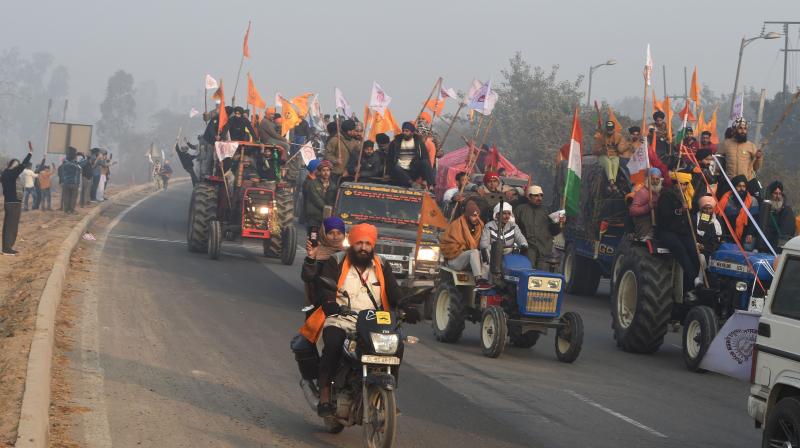 Measures being taken by the agitating farmers at the Singhu border to prepare for a long haul as a resolution (Picture used for representational purposes only, Image source: PTI)

New Delhi: Installation of CCTV cameras for enhanced security, electric fans to beat the heat in the coming months and even a separate optical fibre line for wifi facility in case there is another internet shutdown at the protest site. These are some of the measures taken by the agitating farmers at the Singhu border to prepare for a long haul as a resolution of the stalemate over the new farm legislation seems unlikely anytime soon.

The leaders of the Samyukta Kisan Morcha, leading the protest, have reiterated to continue the agitation indefinitely till the Modi government scraps the three contentious farm laws and extends a legal guarantee of the minimum support price (MSP) for crops.

"We are strengthening our communication and other infrastructure to continue the agitation for a long period," said Deep Khatri associated with managing logistics at the Singhu Border protest site.

To increase security measures and keep miscreants at bay, 100 CCTV cameras with digital video recorders are being installed at the main stage used by the Morcha and also at some identified spots across the protest site's stretch on the GT Karnal Road.

"We are also readying a control room behind the main stage for monitoring and keeping a tab on the happenings here as a lot of people come and go everyday, " Khatri said.

Further, a team of 600 volunteers has been raised for patrolling the protest site, managing traffic and keeping a watch at night. These volunteers have been provided with easily identifiable green jackets and identity cards, he said.

Work is also on to install large LCD screens at 10 vantage points, at a distance of 700-800 metres, to enable the protesting farmers to watch activities like speeches of the leaders from the main stage.

"We will also use these points as pit stops for ambulances and teams of volunteers to coordinate traffic management, patrolling and response in case of any emergency," Khatri said.

In order to deal with any disruption in internet service as was done recently by the government, the Morcha is also hiring a separate optical fibre line for wifi facility, Khatri said.

He said in view of the approaching summer, electric fans and air conditioners are also being installed at the main stage used by the Samyukta Kisan Morcha and other facilities are being strengthened there.

The farmers protesting at Singhu asserted that they were ready to camp in protest for months and there was no dearth of people and resources to do so.

"We come from the culture of langar (community kitchen), so food is not a problem. Many farmers come here, stay for several days and go back to their villages to attend to their fields while others come and join us. This is going on and there is no lack of farmers' strength here," said Ranjit Singh from Moga in Punjab.

Morcha leader Rakesh Tikait who is staging the protest at Delhi's Ghazipur border had on Wednesday said the farmers' agitation will be long drawn and it will spread across the country in the coming days.

The farmers are protesting at Singhu, Ghazipur, Tikri border points of Delhi since November, demanding that the Centre scrap the new farm legislation.

The stalemate over the farm laws continues as 11 rounds of talks between the Central government ministers and farmer leaders have failed to achieve any breakthrough.

Tikait had on Wednesday said the government should talk to the farmer leaders to find a solution to the issues at hand.