Congress confident of winning all 7 LS seats in Delhi, no tie-up with AAP

Rahul's comment puts an end to speculation that Congress was having a rethink about going solo in Delhi. 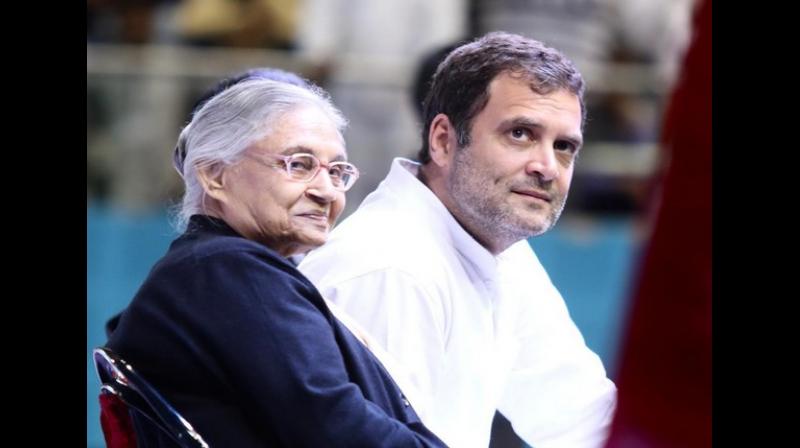 Congress President Rahul Gandhi on Monday made it clear that his party will have no alliance with Aam Aadmi Party (AAP) for the upcoming polls in Delhi. (Photo: ANI)

New Delhi: Putting to rest all kinds of speculation, Congress President Rahul Gandhi on Monday made it clear that his party will have no alliance with Aam Aadmi Party (AAP) for the upcoming polls in Delhi as he told party cadres to work to ensure victory at all the seven Lok Sabha seats at stake in the national capital.

"I want to tell all Congress party booth workers that now it's up to you. You have to win all seven Lok Sabha seats in Delhi. Tell people that the Congress is the only party that can change Delhi and entire India," Rahul said while addressing a booth level party workers meeting here.

His comment puts an end to speculation that Congress was having a rethink about going it solo in Delhi even after Delhi Congress chief Sheila Dikshit had declared that there was unanimity against forging an alliance with the AAP.

Following the announcement, AAP convener and Delhi Chief Minister Arvind Kejriwal had said there are "rumours" that the Congress has a "secret understanding" with the BJP and asserted that his party is ready to fight the "unholy alliance".

Kejriwal also said that the Congress was helping the BJP by not allying with the AAP.

"At a time when the whole country wants to defeat Modi-Shah duo, Cong is helping BJP by splitting the anti-BJP vote. Rumours r that Cong has some secret understanding wid BJP. Delhi is ready to fight against Cong-BJP alliance. People will defeat this unholy alliance," he had tweeted.

On February 28, senior party leader P C Chacko had met Dikshit and suggested that the party should form an alliance with AAP in the upcoming Lok Sabha polls, said a source.