According to the CISF, the mob of around 150 first manhandled the polling staff at the booth 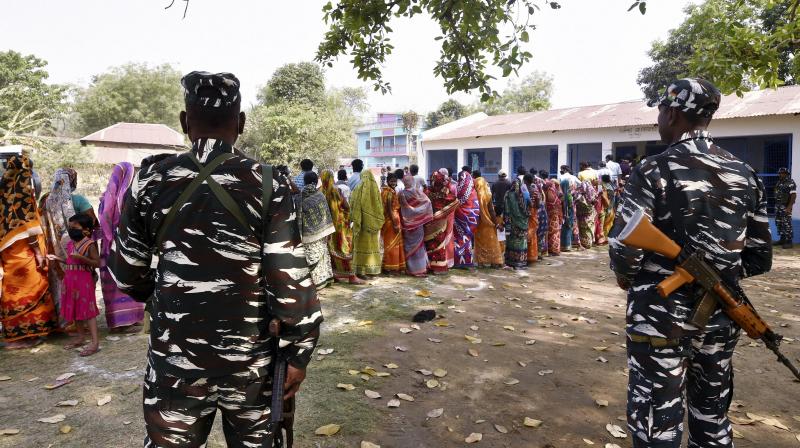 The CISF booth commander tried to pacify the miscreants but the mob entered the polling booth and beat up the other polling staff on duty. — PTI file photo

Kolkata: The fourth phase of Assembly elections in West Bengal witnessed unprecedented bloodbath on Saturday when the Central paramilitary forces gunned down four Trinamul Congress workers during an attack on a polling booth while ruling party workers allegedly shot dead a first-time voter outside a booth during a clash. Both incidents took place in Cooch Behar of North Bengal, the BJP’s stronghold.

The Election Commission said that the CISF had to fire in order to save lives of voters who came to vote, put in place certain restrictions, including extending the "silence period" from 48 hours to 72 hours for the fifth phase of polling West Bengal. It also barred the entry of politicians in Cooch Behar district for the next 72 hours to prevent any possible law and order flare-up.

The shocking incident took place at around 10.30 am when a group of TMC workers stormed a polling booth (No. 126) at Amtali Madhyamik Shiksha Kendra in Shitalkuchi Assembly constituency. Facing their attack, Central Industrial Security Force (CISF) troopers, who were guarding the booth, fired on the mob and shot dead four persons — Hamidul Haque, Monirul Haque, Samiul Mian and Amjad Hossain — while injuring three others.

According to the CISF, the mob of around 150 first manhandled the polling staff at the booth. Sources said they were not “armed”, but some were carrying bamboo sticks.

"The CISF booth commander tried to pacify the miscreants but the mob entered the polling booth and beat up the other polling staff on duty. Few miscreants tried to snatch the weapons of CISF personnel deployed there. As a result, CISF personnel fired two rounds in the air but the mob did not pay any heed to the warning. In the meantime, a quick response team of the CISF and police also reached the spot. The mob further started advancing aggressively towards CISF personnel. Therefore, sensing imminent danger to their life, they fired seven more rounds towards the advancing mob of miscreants. While the above incident was going on, more police parties also arrived at the booth. It is reported that in self-defence they have also fired a few rounds," the CISF said.

Polling was stopped immediately by the EC.

The CISF's justification of "self-defence" was supported by the district police and administration in its preliminary report to the EC which, issuing the CISF a clean chit later, said, "Recourse to open fire by CISF personnel became absolutely necessary in order to save lives of voters lined up at the polling booth, those of other polling personnel and their own lives as mob had attempted to snatch their weapons."

The TMC, however, described the shooting as “cold-blooded murder" of its workers in its complaint to Chief Electoral Officer West Bengal Ariz Aftab. Spewing venom against the Central forces and Union home minister Amit Shah, an angry chief minister flew to Siliguri and announced that the Criminal Investigation Department would probe the killings.

The TMC chief is likely to visit the kin of the deceased on Sunday though the EC has banned the entry of any politician of any level in Shitalkuchi.

The tragic incident follows party supremo and chief minister Mamata Banerjee's recent statements that the Central forces were acting in a biased manner at the behest of the BJP and asking voters to gherao them.

On Saturday, her party landed in the dock after its workers shot dead a first-time voter, Ananda Burman (18), in the same district. The teenaged boy was standing in a queue outside a polling booth (No. 285) at Pathantuli Shalbari area when a scuffle broke out between TMC and BJP workers. Another person, close to him, also suffered bullet injuries.

Updated data is expected from the Election Commission on Sunday. Among the 11 seats in South 24 Parganas, five -- Jadavpur, Kasba, Tollygunge, Behala East and Behala West -- are actually located in Kolkata.

The Election Commission’s order said that in Cooch Behar, comprising nine Assembly constituencies where voting got over on Saturday, no political leader from any national, state or other party should be allowed to enter the geographical boundaries of the district for the next 72 hours.

"The Election Commission of India further directs that the silence period for phase 5 (i.e. for polls scheduled on April 17) shall be extended to 72 hours and no campaigning shall be permitted during 72 hours before the close of the poll in order to ensure the conduct of free, fair and peaceful elections," an EC order said. The silence period is generally for 48 hours.