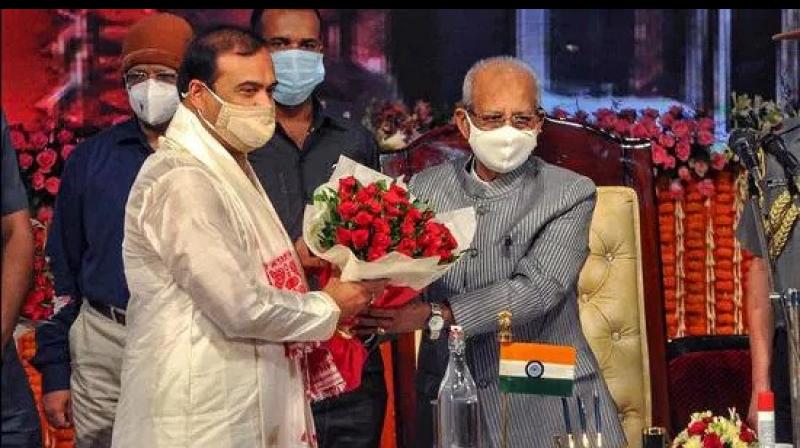 Himanta said his government’s prime focus will be to fulfil electoral promises of one lakh jobs, waive off all microfinance loans taken by women in the state and further strengthen the Arunodoi scheme, that provides Rs 830 to eligible households every month. — PTI

Guwahati: Assam’s new chief minister Himanta Biswa Sarma, who took the oath and assumed office on Monday morning, straightaway called upon the United Liberation Front of Asom (Independent) commander-in-chief, Paresh Baruah, to abjure the path of violence and come to the table for talks. Saying the agenda of his government will be to maintain the state’s prevailing peace and harmony and take it on the path of prosperity, Mr Sarma told reporters the people would get a proactive government which will work round the clock for them. “You will see a proactive government which will be there for you at 12 midnight, at 5 am and also at 2 pm. We will try and resolve all pending issues and seek the blessings of the people of Assam,” he said.

He said his government’s prime focus will be to fulfil electoral promises of one lakh jobs, waive off all microfinance loans taken by women in the state and further strengthen the Arunodoi scheme, that provides Rs 830 to eligible households every month. Mr Sarma said the first Cabinet meeting of his government will take place on Tuesday, and the prevailing Covid-19 situation will be on top of the agenda. “We will announce a planned roadmap to handle this Covid crisis. Daily cases in Assam have crossed 5,000. The situation in Assam may affect the other northeastern states as well,” he said.

The chief minister pledged that all the promises made by the BJP and its allies in their election manifesto will be fulfilled. “We saw peace and development in the past five years. I appeal to the remaining outlawed armed outfits in Assam to join the peace talks. I would make a special request to the leader of the United Liberation Front of Asom-Independent (Ulfa-I) Paresh Baruah to shun violence and join talks for permanent peace in the state.”

In response to a question on the NRC, Mr Sarma said that as promised by the BJP in its manifesto, his government would seek re-verification of the National Register of Citizens (NRC). The document that lists Indian citizens in Assam was released in 2019 with exclusion of the names of 1.9 million applicants. The BJP has termed it as faulty, saying while many genuine citizens got left out, those with dubious credentials managed to get enlisted.

On the granting of Scheduled Tribe (ST) status to Ahoms, Koch-Rajbongshi, Moran, Motok, Sootias and tea-tribe, Mr Sarma said the state government would try and resolve the issue through talks and without affecting the rights of tribes already under the ST ambit.

On concerns about Assam’s financial situation, Mr Sarma, who held the finance portfolio in the previous government, said the state has nearly Rs 7,000 crores in its treasury and stressed there was no cause of concern as the state’s fiscal health was among the best in the country.