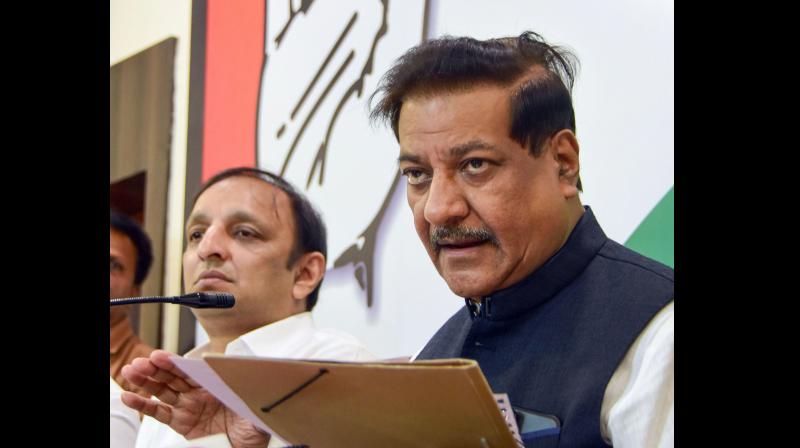 New Delhi: The Congress on Saturday launched a scathing attack on the Center over the creation of the new ministry of cooperation. Senior Maharashtra Congress leader and former chief minister Prithviraj Chavan questioned the need for carving out a separate ministry since there was already a department of cooperation. He said, “Administratively it makes no difference. Cooperatives are important for Gujarat and Maharashtra primarily. Both states are very important for the BJP,” and added that it's not clear in what way they will promote cooperatives. "It is only to control the cooperatives, because cooperative institutions hold massive influence locally," he said.

Several Opposition leaders feel that the move is to “hijack the cooperative movement” that currently falls under the state governments. Senior Congress leader and MLA from Kerala, Ramesh Chennithala, said, “Cooperatives is a state subject under entry 32 of the state list under the Schedule 7 of the Constitution. How can they create a ministry without an Act of Parliament? The BJP wants total control of the cooperative movement across the country.” The cooperative model has been a source of political power in states such as Maharashtra, Kerala, Gujarat, parts of Karnataka, Tamil Nadu, Madhya Pradesh and West Bengal.

As the monsoon session of Parliament is going to start at the end of July, the government can expect uproar over the creation of the new ministry in Parliament. One of the senior Congress leaders said that the party will be speaking to other Opposition parties so as to build a consensus on how to collectively take on the government over this issue. Several Congress leaders have already termed the creation of the ministry of cooperation as "an attack on federalism as cooperatives is a state subject". Congress leaders have questioned the need for the ministry when even the multi-state cooperative societies are already governed by a Central Act the multi-state Cooperative Societies Act of 2002.