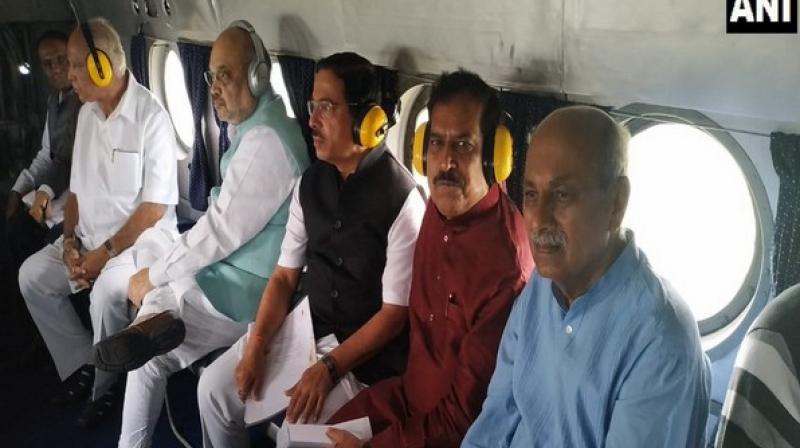 At least 24 people have lost their lives while around 1,024 villages in 80 talukas of 17 districts have been affected due to floods caused by incessant rains in the region, according to the Chief Minister Yediyurappa. (Photo: ANI)

The Union Home Minister surveyed the flood-hit areas onboard a helicopter. Yediyurappa briefed him about the rescue and relief operations, which are underway in the state and Belagavi district.

Speaking to ANI about the survey, the Chief Minister said Shah is completely satisfied with the rescue and relief operations undertaken by the state government.

"We have requested for immediate aid of Rs 3,000 crore. The situation is pathetic here as more than 16 districts have been affected very badly. Tomorrow or a day after tomorrow, we will review the situation in other six or seven districts," he said.

He said Shah has asked him to visit Delhi on August 16 to discuss the "expansion of the Cabinet and other issues."

Union Minister Joshi said: "Shah has personally experienced the situation and the Chief Minister has submitted a memorandum. He reviewed areas of Chikodi, Kolhapur, Sangli, and Rajapur dam in Maharashtra."

The Union Home Minister has ensured all support to Karnataka.

At least 24 people have lost their lives while around 1,024 villages in 80 talukas of 17 districts have been affected due to floods caused by incessant rains in the region, according to the Chief Minister.

On Saturday, Chief Minister Yediyurappa had conducted an aerial survey and announced Rs 5 lakh compensation to next of kin of the deceased.

The Chief Minister had informed that over two lakh people have been evacuated from flood-affected areas and 1.61 lakh people are in 664 relief camps across the state.

It was announced that all schools, and colleges -- government and private -- in affected flood-hit districts will remain closed till August 15.