Will give warm hug to Pilot, other rebels if Congress top bosses forgive them: Ashok Gehlot

Gehlot added that it was his responsibility to address the grievances of those who were annoyed with him. 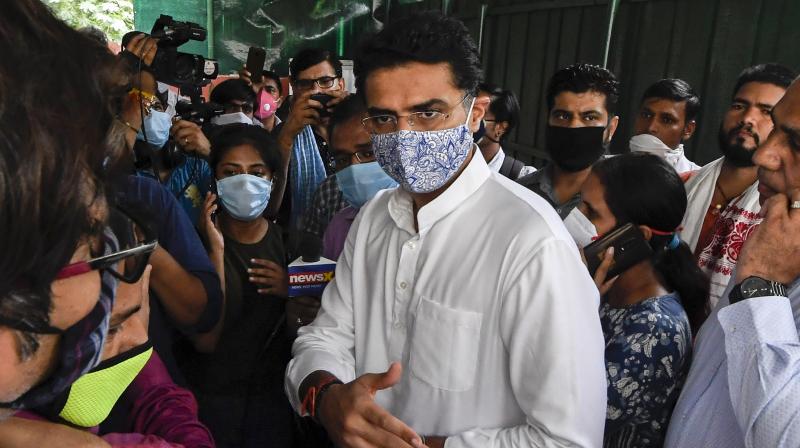 Congress leader Sachin Pilot interacts with the media at his residence in New Delhi, Tuesday. (PTI)

A day after the truce in the Rajasthan Congress, chief minister Ashok Gehlot seems to be upset with the return of Sachin Pilot into the party fold. Speaking to reporters on Tuesday, the Congress stalwart evaded any response when asked how he would go back to working with someone he had called "nikamma (useless)".

However, Gehlot did tell mediapersons that he would “give them a warm hug if party leadership decides to forgive the rebel MLAs". He also added that it was his responsibility to address the grievances of those who were annoyed with him.

"If any MLA is annoyed with me, then it is my responsibility to address that. I have kept doing this in the past and will do this now also," a news channel quoted Gehlot as saying.

Gehlot's reaction came on a day when several Congress leaders "welcomed back" Pilot after the former Rajasthan deputy chief minister's meeting with Rahul Gandhi, signalling an "amicable resolution" of nearly a month-long political crisis in the state.

Soon after his patch-up talks with senior Congress leaders, Pilot on Monday night said he has never hankered after posts and his was a fight for principles.

"Welcome back Sachin. A constructive and enjoyable phase of Rajasthan building awaits," senior Congress leader Abhishek Singhvi tweeted after the party issued a statement saying Sonia Gandhi has decided that the AICC will constitute a three-member committee to "address the issues raised by Pilot and the aggrieved MLAs and arrive at an appropriate resolution thereof".

Singhvi also congratulated Rahul Gandhi and his tireless team, including KC Venugopal, Randeep Surjewala and Ajay Maken, and added "not to forget political instincts of (Ashok) Gehlot which rarely fail him".

Congress chief spokesperson Randeep Surjewala said, "The political crisis in Rajasthan Congress stands resolved amicably by the intervention of none other than Rahul Gandhi himself."

"This is reflective of steadfast unity in Congress party and the commitment of Congress legislators to never fall prey to BJP's evil designs to defeat democracy," he said.

Senior Congress leader Digvijaya Singh said he was very happy that finally the efforts of Rahul Gandhi and Priyanka Gandhi "resolved the dispute of Rajasthan Congress". "Now everyone should fulfill the promises made to the people of Rajasthan," he said.

After his meeting with Rahul and Priyanka, the party said Pilot will "work in the interest" of the Congress and its government in Rajasthan.

The meeting between Rahul and Pilot at the former party chief's residence, where Priyanka was also present, lasted two hours during which they had a "frank, open and conclusive" discussion, the party said.

Pilot on Tuesday said he did not demanded any post from the party's top bosses and that there should not be any vendetta politics as he returned to Jaipur nearly a month after his revolt against Gehlot.

The Congress leader told reporters that he did not make any statement against the party and had gone to discuss issues with the Congress high command in Delhi. I have not demanded any post from the party, he added. Pilot, however, said he was shocked at statements made against him.

"I am sad, shocked and hurt due to the kind of words used against me," Pilot said.