The Ministry is also making efforts to spread awareness about the management and recycling ecosystem across India. 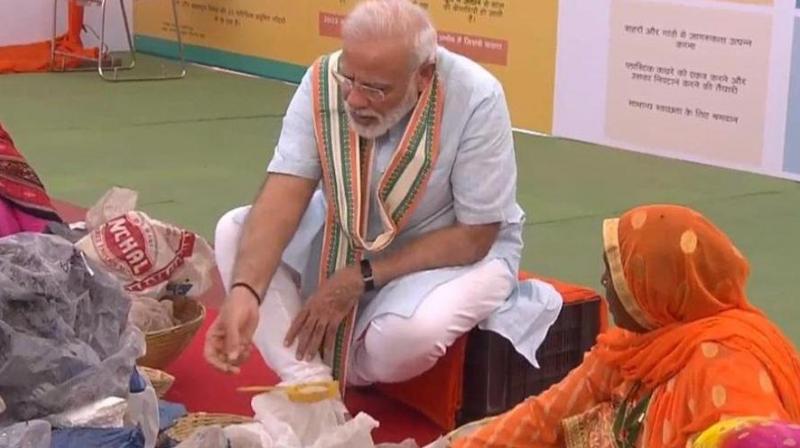 At the event, Modi also exchanged pleasantries with a couple of women rag pickers.

Mathura: Days after the Central Government put a blanket ban on the single-use plastic, Prime Minister Narendra Modi on Wednesday was seen extending a helping hand to the rag pickers who segregate plastic from the garbage on a daily basis.

The Prime Minister who was in Mathura for the inauguration of National Animal Disease Control Programme was seen sitting on a brown coloured crate with the women rag pickers and was separating plastic from a large heap of garbage to send out a clear message to the citizens to cut plastic use.

At the event, Modi also exchanged pleasantries with a couple of women rag pickers.

On March 27, the Union Ministry of Environment, Forest and Climate Change amended the Plastic Waste Management Rules (2016). As per the new law, manufacturers, suppliers, and sellers of plastic (and plastic products) across the country will now be required to phase out plastic made products within a span of two years.

In order to spread the message in an innovative way, Union Health Minister Harsh Vardhan also launched an anthem as a part of a campaign to make India plastic-free by 2022. The Ministry is also making efforts to spread awareness about the management and recycling ecosystem across India.

It is worth noticing that the Prime Minister at UNCCD COP 14 Summit in Greater Noida yesterday also called on global leaders to follow India's decision to ban single-use plastic, declaring "time has come for even the world to say goodbye to it".

"I would like to draw your attention to another land degradation; it is the menace of plastic waste. My government has announced that India will put an end to single-use plastic in the coming years. The time has come for the world to say goodbye to single-use plastic," Prime Minister Modi had stated at UNCCD-COP14.